To the Netherlands aboard Emmelène

I plan to sail to the Netherlands again this summer.

Last summer I enjoyed some relaxed sailing around the Solent in tandem with Chris Boxer aboard Emmelène, his split-rigged Coromandel. My health was (and still is) very limited by Chronic Fatigue Syndrome, and I spent what little energy I had on sailing rather than recording all my adventures and blogging. Sorry about that! 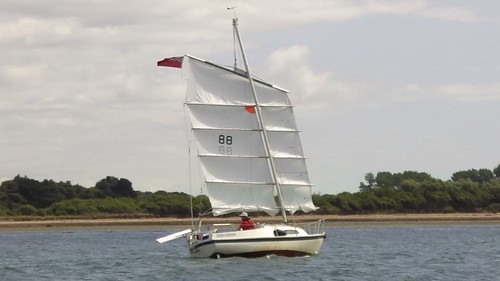 Chris explained that he’d very much like to sail Emmelène to the Netherlands, as I did in 2015, and asked if I’d be able to sail in tandem with Tammy Norie. I had to decline: I have to spend an average of 16 hours per day asleep, keeping me from making solo voyages. However, I felt I could go along with Chris aboard Emmelène as mate, to keep an eye on him and help him with any trouble. And so we hatched a plan.

Unfortunately, the summer of 2018 was almost windless.

But we’ve revived the plan for this year. If there’s any wind at all, we’ll be sailing from the Solent to the Netherlands between 2019-07-15 and 2019-07-28. Our goal is to deliver Emmelène to Lauwersoog, home of Marco and his Wharram catermaran Stern with whom I sailed on my last trip. Emmelène will stay there until next year, when perhaps Chris will take her in to the Baltic.

Maybe by then I’ll be able to catch her up in Tammy Norie, or set off in an entirely different direction. We’ll have to wait and see.

I’m hoping to visit a number of old friends along the way. Let us know if you’d like to meet up!

Tammy Norie’s forward window had a slow leak from when I first sailed her in 2014. It wasn’t very significant, but in the winter of 2017 it managed to rot a couple of books, even though they were in plastic bags. I did two things:

I’ve been somewhat afraid of dismantling Tammy Norie’s windows in case I couldn’t get them back together without unobtainable parts. As it happens I did have to make modifications. This post should help others with similar windows.

Firstly, I chose a dry day with many more dry days forecast. Then I cautiously loosened the screws around the window frame. At this point, I had no idea what kind of screws they were or what they were screwed in to. 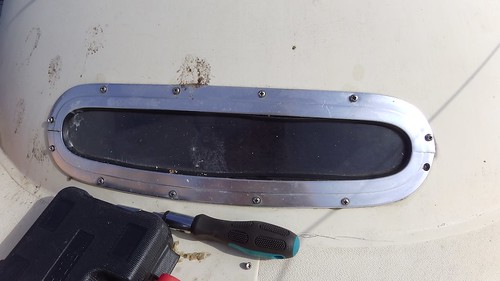 About half the screws didn’t really seem to be attached, and were probably held in by old sealant and dirt as much as anything. Worse, they were self-tapping screws, not bolts. What were they supposed to bite against? 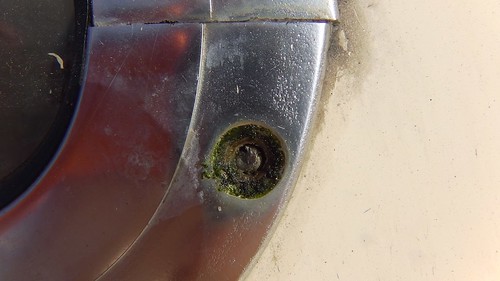 Once they were undone I carefully pried the window away from the cabin top using a scraper, breaking what remained of the outer seal. 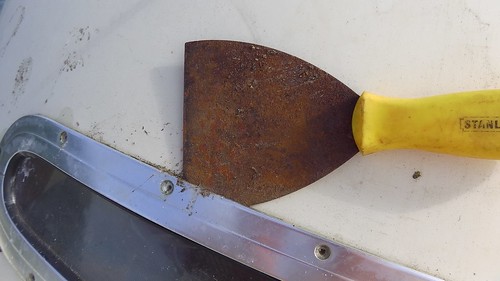 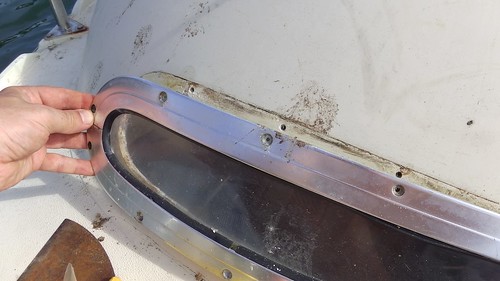 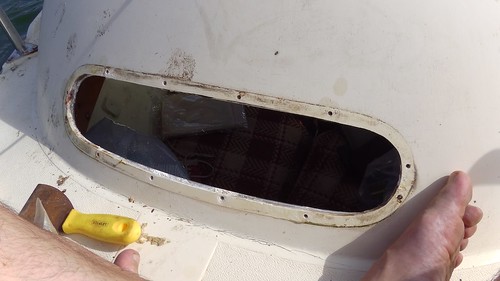 With the window removed I could see the old sealant tape, which was in quite poor condition. 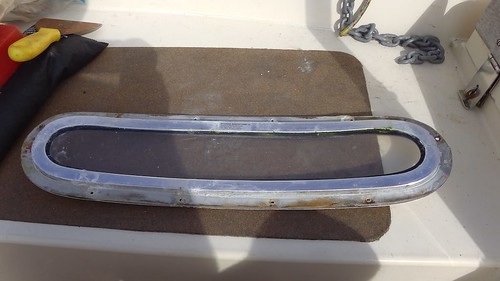 Grains of old salt or possibly aluminium compounds had built up behind the window seal. 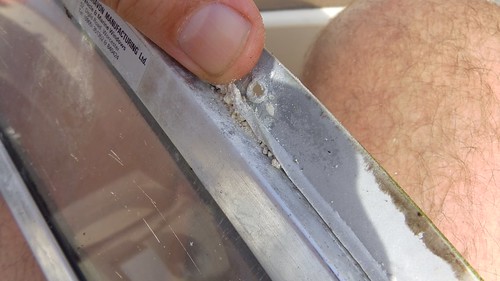 The dried-up sealant was easy and satisfying to remove with a scraper. 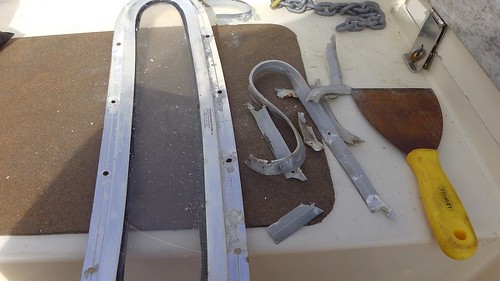 The rubber seal around the window glass (actually a sheet of curved acrylic) was also easy to remove.  It was in good condition, in spite of its age, and only needed a bit of a clean with washing-up liquid. 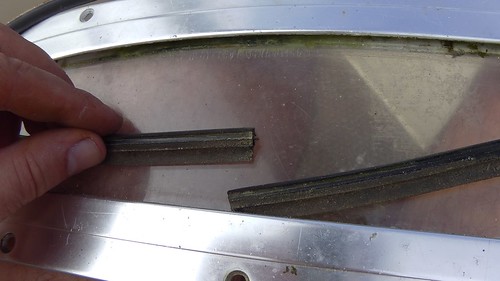 The next task was to figure out how to get the glass out of the window frame so that I could renew its seal. I could see that the window frame was in two halves, but didn’t know how it was joined together. At the ends of the window were some very coroded screws, which refused to turn without severe damage. 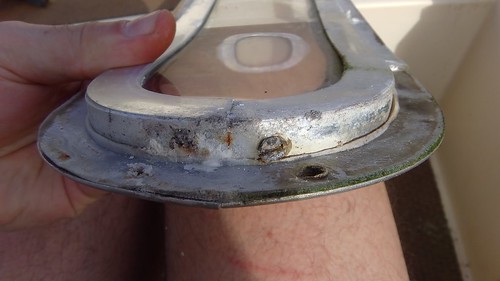 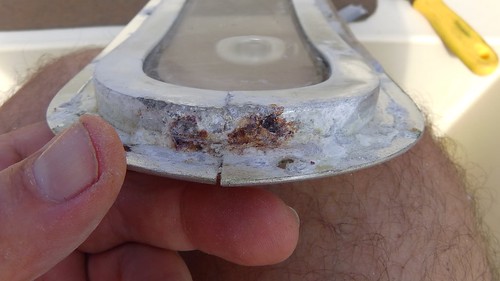 In the end, I was only able to get one of these screws out without destroying it. 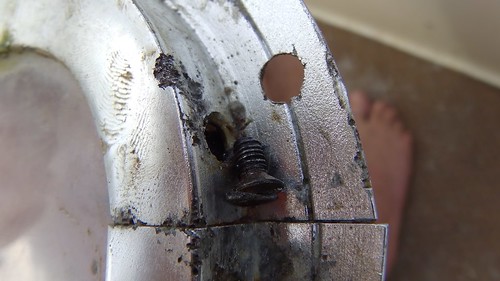 Pulling apart the halves of the window frame revealed a metal block that holds the halves together, serving as a nut for the corroded screws. If absolutely necessary, the screws could be drilled out and this block replaced. 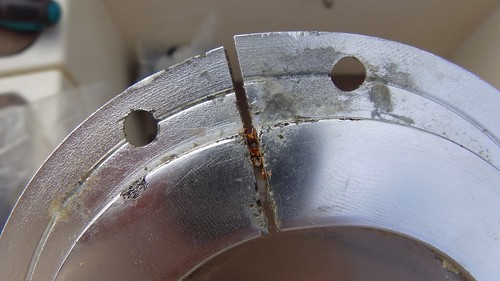 Now the frame was being held together by another strip of sealant around the window glass. I was able to separate the glass from the frame using a soft plastic scraper. 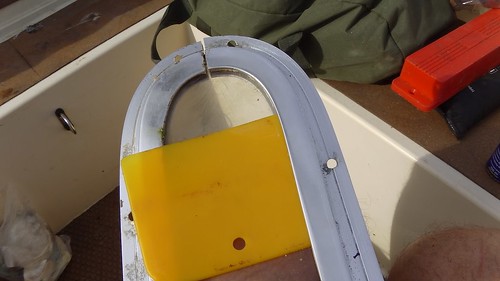 Then at last I was able to get the glass out of the frame.  In this picture you can see the old sealant tape on the inner side of the frame where the glass was attached. 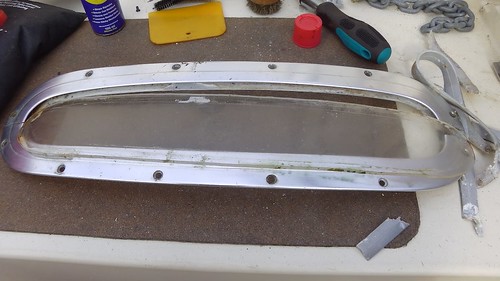 After cleaning out this dried-up sealant, I inserted two replacement beads of butyl tape in its place — one on each side of the glass. 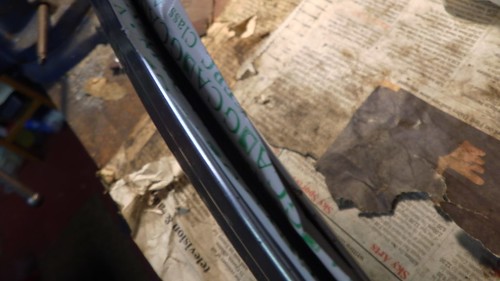 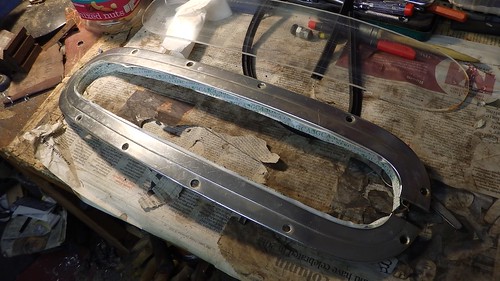 Then I was able to squeeze the window glass back into the frame. There’s plenty of time to do this, since butyl tape does not set. Any excess is easy to gather up for re-use. 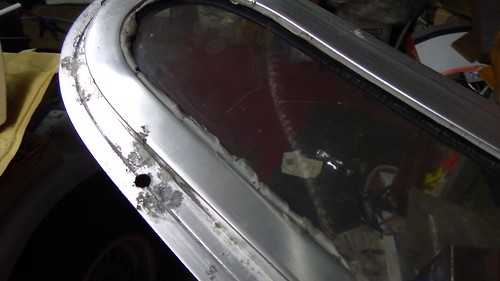 Now, on to the mystery of the self-tapping screws that were failing to hold the window to the boat. Fortunately, they weren’t screwed in to the fibreglass. Less fortunately, they were screwed into a thin layer of aluminium on the inner window frame! Very poor engineering. What’s more, the areas around the screw holes on the inner window frame were severely coroded. No wonder half of the screws weren’t doing anything. 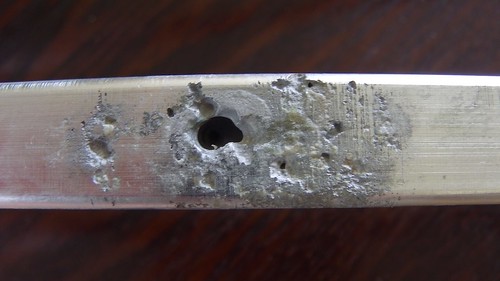 Still, I didn’t really want to modify the frames, so I attempted to repair the screw holes with Milliput epoxy putty. This was a bit of an experiment, since I hadn’t used Milliput before. 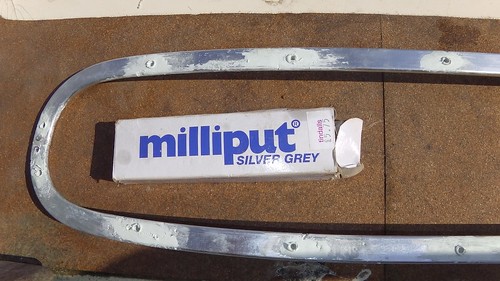 When the putty had cured, I attempted to mount the frame, first laying a bead of butyl tape around the hole. I gradually tightened up the screws, giving the butyl tape a chance to spread. 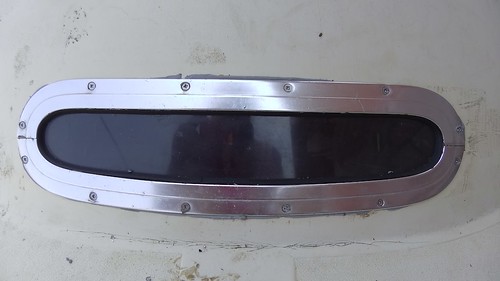 But the screws soon started rotating without biting properly. The putty wasn’t strong enough for this job. Back off with the window and on to plan B. Fortunately, butyl tape is forgiving, and you can gather it up and re-use it. 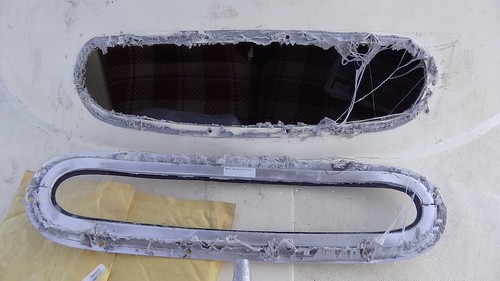 Plan B was to replace the awful self-tapping screws with 4mm machine screws, passing right through the inner frame to proper nuts. This unfortunately meant drilling holes right through, and that nuts would be visible inside, but it allowed the frame to be tightened properly. It also means the window is properly attached to the boat! 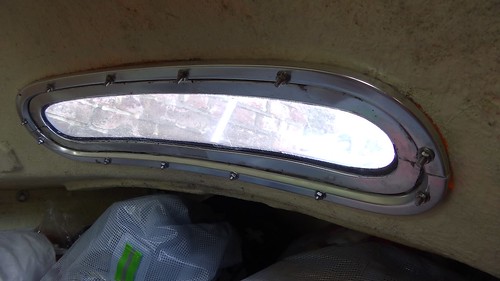 (I later bought stainless-steel dome nuts so that the ends of all these screws are covered up. This looks very nice, and also reduces the chance of any injury. I must take a picture of this and insert it here.)

An important detail that I learned by trial-and-error. Do not turn the machine screws in order to tighten them. This tends to make the screws pull away from the butyl sealant, making them leak. Instead, add an extra blob of butyl tape to both side of each hole, then slowly push the screws through. Then tighten up the nut. After this, none of the screws leaked. 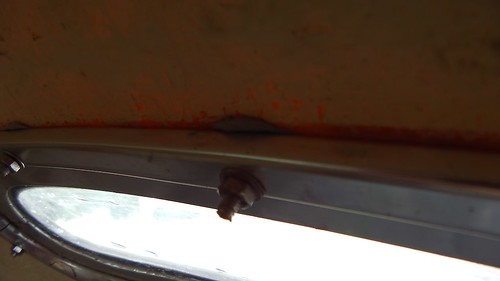 Here’s how the window looked after tightening up the screws, but before I’d cleaned up the excess butyl. A little more squeezed out over the next few months, but was easy to tidy up using a plastic scraper. 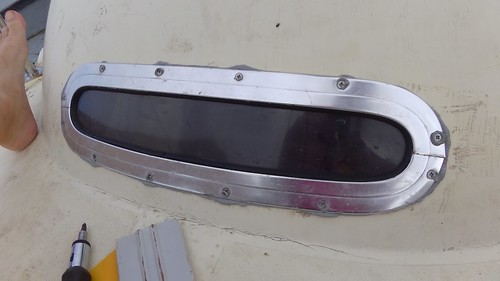 Now, did you spot the “deliberate” mistake? At this point, my windows were still leaking slightly. I was rather frustrated. But by careful observation I was able to work out what I’d done wrong. I didn’t put extra butyl behind the joins in the outer window frame. This mean there was a path for the water from outside to get around the window glass. Here’s a close-up of one of the joins. 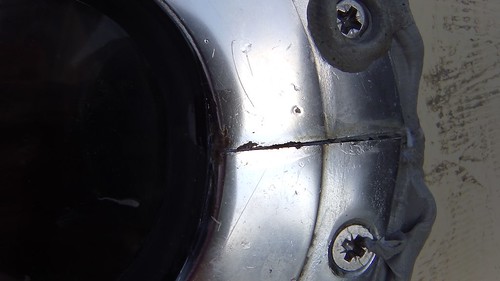 Fortunately, I was able to fix this without dismantling anything. I simply pressed a generous amount of butyl tape slowly through the crack with my fingers.

I tested the window simply by pouring and throwing buckets of water around. But it had a much more thorough test through the winter of 2018/2019. I’m pleased to report that there is no evidence of any leaks.

I’m pleased with this work for three reasons:

That last one is reason enough to service all the windows, so that’s going on the to-do list.

(You can also browse the photos in this album on Flickr.)

Filed under Repairs and Modifications, windows