Last summer I noticed a few problems with my Hebridean self-steering gear. This post is a (belated) log of the things I did to fix it up, and may be of interest to other Hebridean owners.

The first problem I noticed was that the Hebridean’s trunk could collide with the fairleads I put in the mount to allow the steering lines to cross over (described in this video). This is a simple error of planning on my part, but at some point there’d clearly been enough force on the pendulum to split the mount. 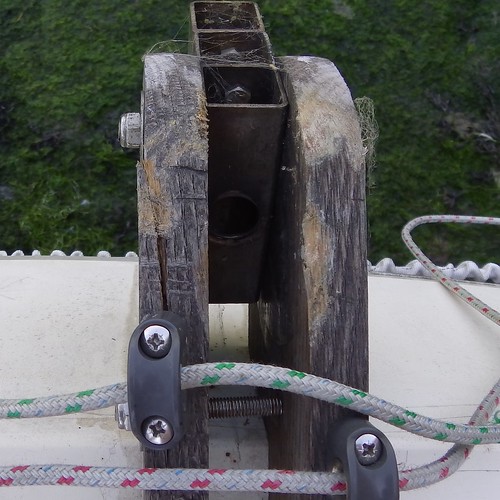 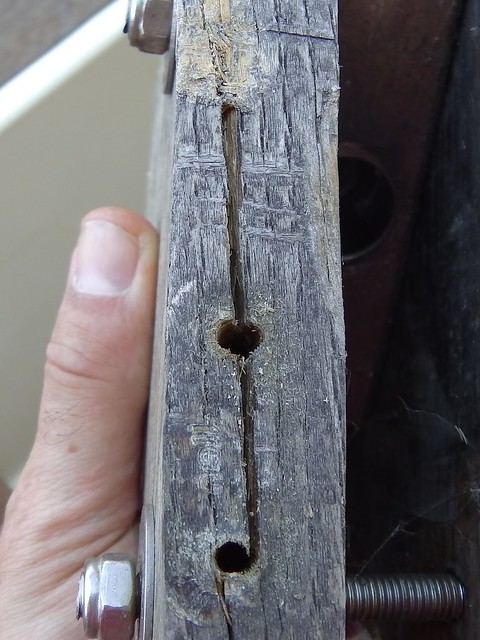 This problem will go away when I turn the mounting blocks upside-down (described below) but in the meantime it’s a fairly simple job to glue the mount back together. I also have quite a bit of spare oak planking from the Hebridean construction that I can use to replace it if necessary. 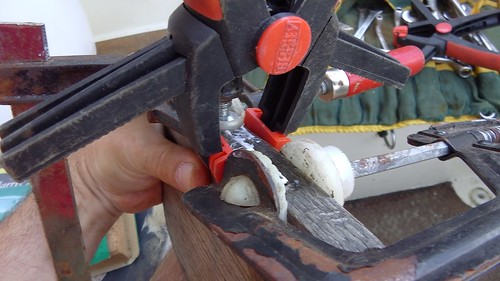 You can’t have too many clamps!

The mount itself has developed a distinct curve. I’m not sure what’s caused this. There may have been a collision with my boat when I wasn’t around, or there may be some systematic pressure on one direction. 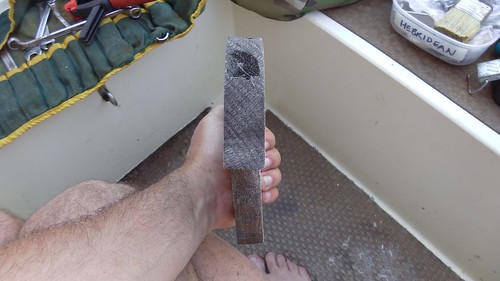 The curve has affected the mounting bolts too. 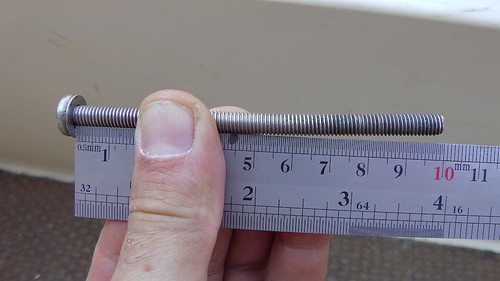 I haven’t done anything to fix this curve yet.  It doesn’t affect operation.

A much more serious problem is that the carbon push rod that connects the wind vane to the pendulum had split at both ends and come unglued from the plugs that attach it to the rest of the linkage. 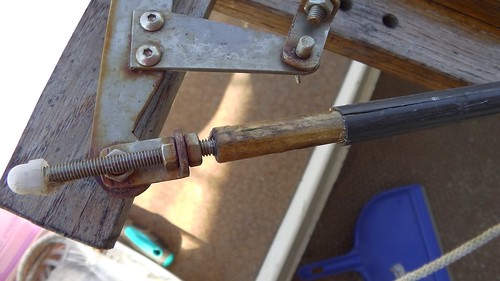 This is much less likely to be a problem with the later versions of the Hebridean, as John Fleming is now using cross-woven carbon tubes and supplies ferrules for the ends of the rods, as seen in this photograph of Emmelène’s mark 2 Hebridean. 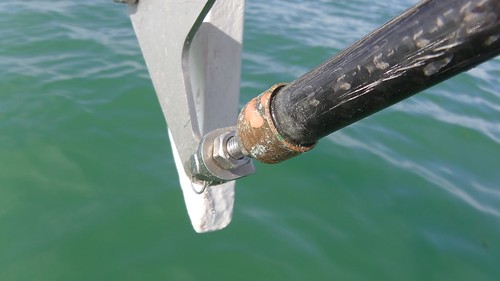 I fixed this using epoxy to re-attach the tubes, and then adding a whipping to keep the tube ends together. 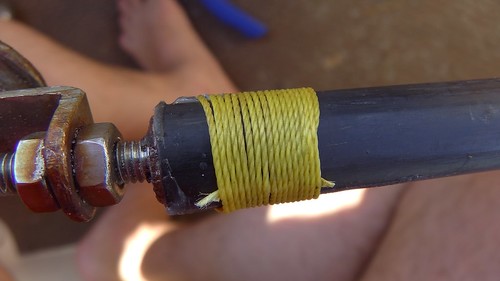 I noticed that the top of the push rod was colliding with the turret tube at the extremes of movement, and this may have contributed to the splitting. This was easily fixed with a few washers, but it does show that it pays to watch all the parts of your self-steering gear as it operates. 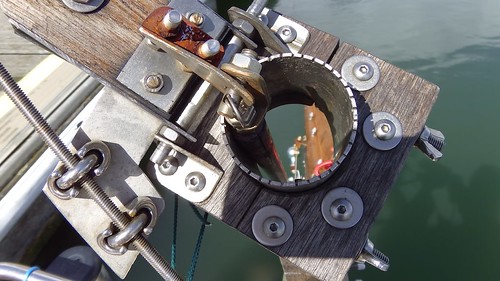 A much less serious problem is the mascot. I bought a “pen topper” in the form of an RNLI lifeboatman’s head from an RNLI shop, and he’s been sitting on the end of the vane’s connecting rod for some years. For some reason, local birds have decided to eat his face! 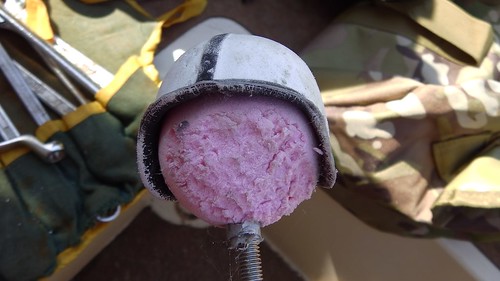 Unfortunately, this item isn’t in the RNLI shop any more, so I’m on the look out for a new mascot.

Here’s a problem I have not yet fixed. The weight of the Hebridean rests on a pin that keeps it floating on the blocks that are clamped by the mount. This forms a bearing that wears at the pin when the Hebridean is steering. A few months of use and the pin looks like this: 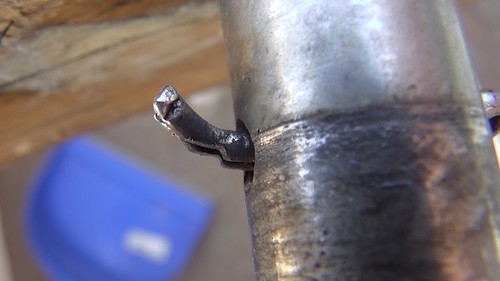 Emmelène‘s Hebridean has a two-part solution for this. Firstly, he has a HDPE washer between the pin and the blocks. (HDPE is what plastic milk cartons and chopping boards are made of.) This more or less eliminates the wear. But an extra clever thing is that his blocks are mounted upside-down from Tammy’s, so that the top edge protrudes from the mount, making room for the washer. Here’s Tammy Norie’s mount (during fitting). 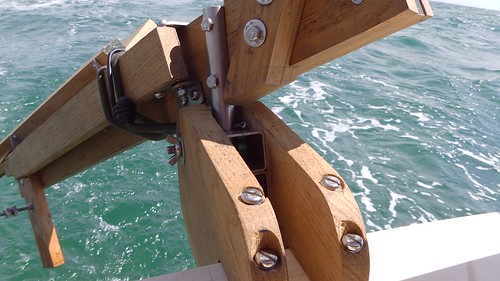 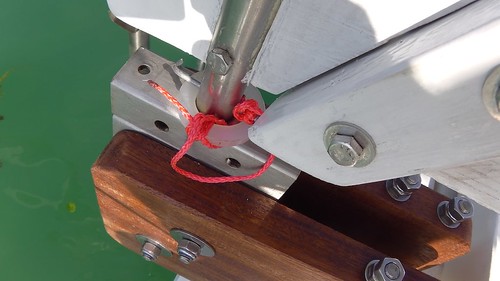 Simple and effective. I’ll be copying this arrangement on Tammy. It will also eliminate the collision between the Hebridean’s trunk and the fairleads that caused the mount to split.

I hope this is of interest, at least to other Hebridean owners. I welcome comments!

Filed under Repairs and Modifications, self steering

3 responses to “Maintaining the Hebridean”