She didn’t want it to end

Tammy Norie arrived from her North Sea Crossing at Woodbridge at high tide on Monday 2015-08-31, and after a brief stop at the Deben Sailing Club, spent the night in the Tide Mill Yacht Harbour. My crew for the North Sea Crossing, Martin Roberts, lives in Woodbridge and I was very glad to use his shower and drink his family’s tea before heading home.

Steve Crowther very kindly offered me the use of his mooring on the bank just north of Tide Mill, so I came back before the next afternoon’s high tide to move her there.  I walked up to take a look at the dock and lines, then back to Tide Mill, paid my bill, and drove Tammy over the sill.  There was a noticeable ebb current trying to take me downriver and it took a good ten minutes to motor against it up river. 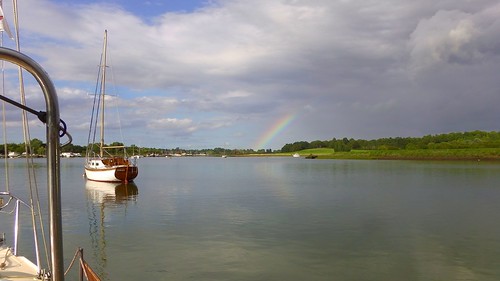 And then of course, I went aground trying to get on to the dock.  I made a couple of attempts, and even attempted to use the kedge anchor to haul myself closer, but it was too late.  I was stuck about 4m off the bank. 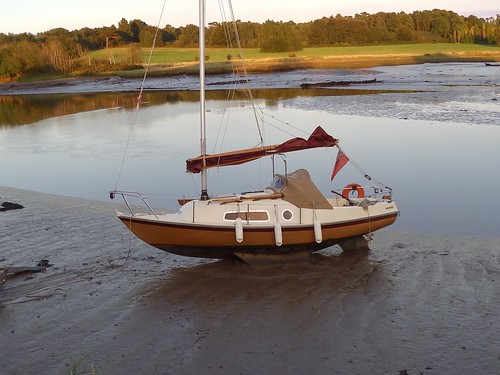 A couple were walking along the tow path and took a line to the dock, and engaged me in a long chat about boats and travel. I was resigned to staying there until the next high tide at 3am.  Well, at least I could do a bit of tidying and maintenance.

No chance! Steve called, and we had a good long chat.  Then Martin called and asked if I was in Woodbridge. “Sort of,” I said. He came along and suggested I use the dinghy on the ebbing water behind Tammy. But in fact what I did was stick it on the mud and use it as a bridge to the shore.  It slid along very well on the mud! 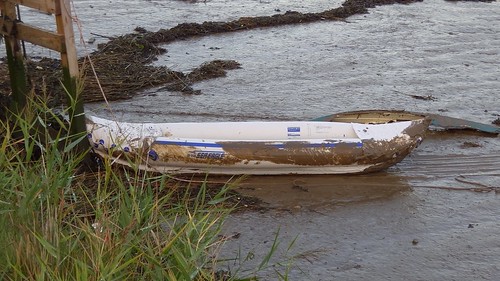 And so I spent a very pleasant evening with Martin and his family before returning to Tammy and sleeping until the tide came in again. As a reward I was greeted by this beautiful dawn. 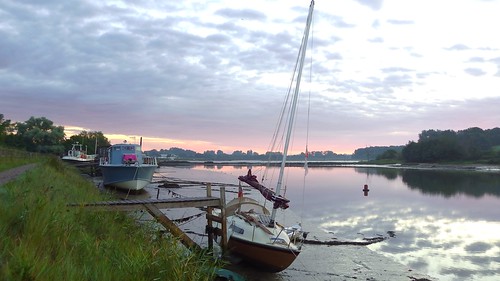 And so the cruise was finally over.

But the blog articles certainly aren’t.  I have about 500 photos to process, several hours of video, and quite a few events to talk about.  Watch this space.

Incidentally, a rough calculation puts the mud under the dock at 2.8m above chart datum. There’s a chance I’ll get neaped. But it’s a lovely spot and I’m certainly not complaining. I’ll take a better measurement when I’m next there. It’s a shame that both my sounding poles (actually garden canes) went missing in the Netherlands.