While I was working on the new mast step I got chatting to a fellow member of the Fareham Sailing and Motor Boat Club who had restored a traditional wooden Folkboat. He took a look at Tammy Norie and said “What’s your next boat?”

It took me a few seconds to think about this question. I’m not planning to move on from Tammy Norie any time soon — there’s still too much to learn. So I said “Oh, I’ll build one.”

I can now reveal the design of my next boat.

If that doesn’t make you smile I’m not sure what to do with you. The thing is, it’s only half a joke.

At the Southampton Boat Show I picked up issue 15 of Classic Sailor magazine, mainly because of the retrospective of the Folkboat. Inside I found a review of a wonderful boat, the Fairey Atalanta. It’s a fascinating design by Uffa Fox, resembling a submarine or aircraft fuselage as much as a boat. It has double cast-iron swing keels and is self-righting. It’s steered by a whipstaff, and can plane downwind. I recommend reading about it.

Another inspiration of mine is John Riding’s Sea Egg. Another fascinating boat design, about which very little is available online.

But what’s really got me thinking recently is David Raison’s Magnum Mini, winner of the 2011 Mini Transat. Take a look at this revolutionary hull shape. This is a shallow draft scow designed to form an efficient shape when heeled, quite different from the sharp-bowed design of the typical racing yacht.

Matt Layden’s Paradox, Elusion, and Enigma are also fascinating designs, especially because of their shoal draft, chine runners, and lugsails. I was lucky enough to have a close look at a Paradox named Faith at Ashlett Creek. 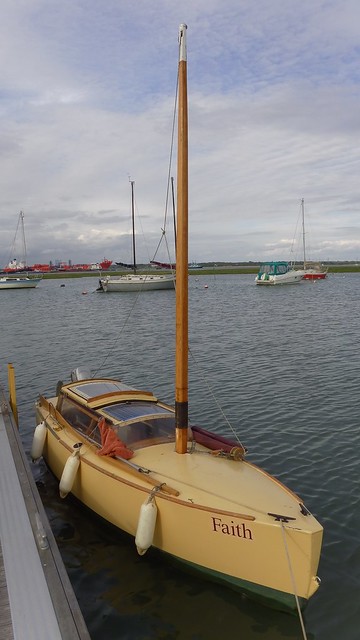 And finally, there’s my dad’s favourite, the Thames Barge. Dad led the restoration of a Thames Barge at Pin Mill when he was in his 20s, and he’s very fond of them. He strongly believes in the capabilities of the boxy barge shape and its lee boards.

Honorable mentions also go to the Wadder and the Southerly shoal draft cruisers.

I have many many sketches of boats, including this one I made (very rapidly) for Annie Hill’s Sib-Lim challenge (very sensibly ignored too). 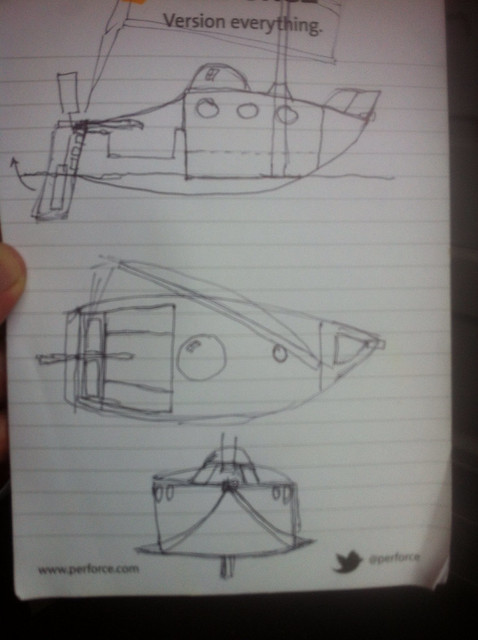 I think perhaps you can see a theme here.

Edit: It looks like Yrvind has been thinking along the same lines. He seems to have lee boards and metal sheet ballast (like the Southerly), as I intended in my Sib-Lib sketch above. Time to brush up my Swedish!