Thanks to Martin at Hendy Honda Marine who helped to identify the engine and found the part in a warehouse in Belgium, as well as putting together a nice spares kit.

Tammy Norie came with a Honda BF100 outboard engine from sometime in the early 1980s.  Its serial number confuses Honda dealers and it’s difficult to get parts or information. I did manage to download a user manual and even found an on-line service manual.  On the first weekend we noticed that the cockpit was filling up with exhaust fumes while the engine was running.

The engine has mysterious “nostrils” half-way up the shaft.  When she’s in the water the top one of these breathes exhaust into the boat. 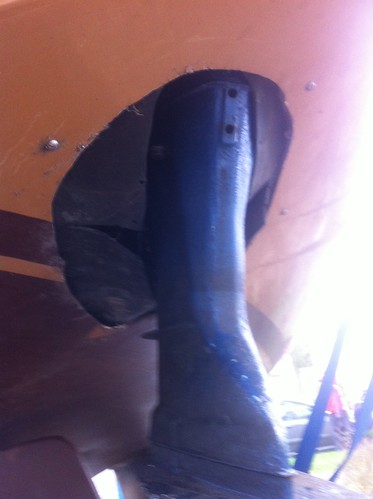 Although these nostrils appear on the diagram that came with the engine, they aren’t labelled, and the diagram shows the exhaust exiting with the cooling water by the propeller. 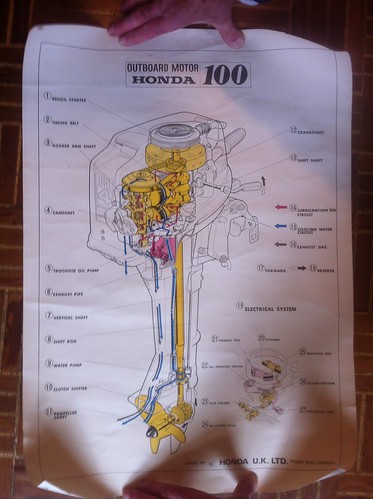 So Dad tapped threads into the nostrils and we made some nose-plugs. We’ll have to see if they cause the engine to choke, in which case we can just unscrew them and try plan B: some sort of improvised exhaust pipe! 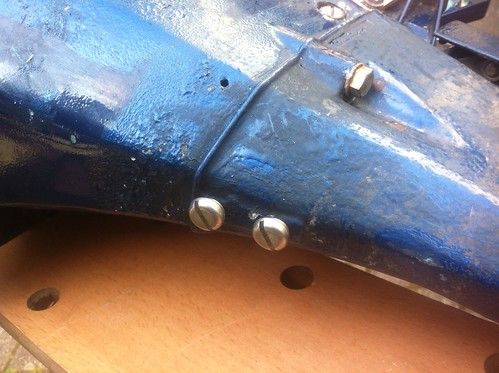 Edit: The nose-plugs worked beautifully during the East Coast Launch Weekend. There were no engine fumes at all in the cockpit or elsewhere in the boat, and the engine was able to run happily with the locker lid closed, whereas before it would choke on its own fumes. Success! Unfortunately, we broke the engine in another way, but you can find out about that is you read the post.

Filed under engine, Repairs and Modifications