Sailing Single Handed to the Azores and Back

My friend James Drinkwater, who sails a lovely junk-rigged boat Barny out of Ipswich, has sent me a link to a fantastic log “Sailing Single Handed to the Azores and Back” by Mike Spring from 1983, the year after Tammy Norie herself was built.

The voyage was sponsored by 3M and the boat named 3M Mariner. He had all sorts of equipment aboard that we’d consider obsolete today, including a very early satellite navigation system that took 40 minutes to “warm up”.

Filed under From Elsewhere

Chris Boxer has written an account of our tandem sail to Poole and back, where we met Amiina and many others. I’m very pleased to have helped him gain experience and confidence. The more junk sailors the better!

It was the chance to meet Siskin and her owner, Antoine, that made me even think of going to the Netherlands this year. I ended up meeting and making many friends, but sailing Tammy Norie and Siskin together was the biggest goal. We had two great days sailing and a lot of fun.

I sailed into Huizen in the afternoon of 2015-08-22 and moored up next to Dulcibella, an immaculate Drascome belonging to Antoine’s brother, Marcel. 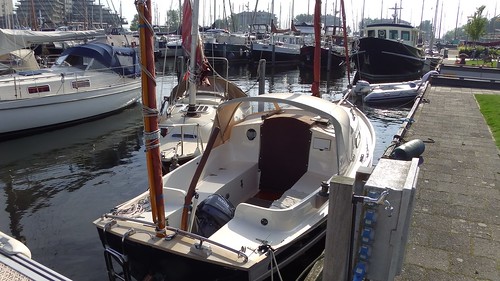 And then it was over to the next pontoon to take a look at Siskin. At that point her sail was off, and none of her halyard, sheet, topping lifts, or even mast lift were rigged. We soon sorted that out! 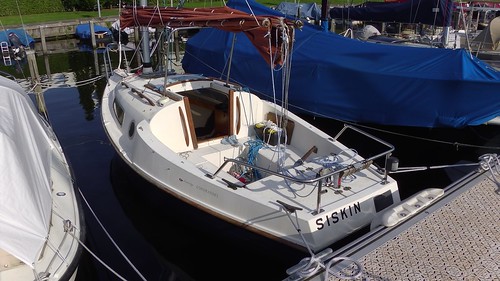 Antoine has modified his mast in a way that’s quite similar to Tammy Norie’s, and so it was quick work to fold it down and get all the lines in place. We had a lovely feast of mussels with Antoine and Marcel and their spouses, and a lot of boat chat. It was really great to meet them all.

Late in the morning, after a few more fixes, Antoine and I sailed our boats out of Huizen.  Antoine at the controls for the first time. 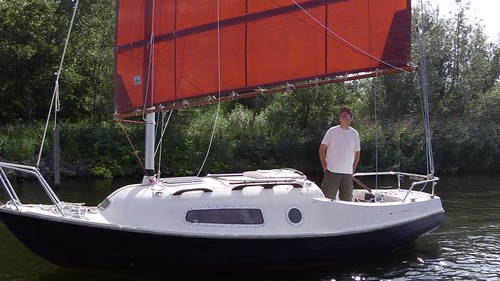 How proud and happy he was. 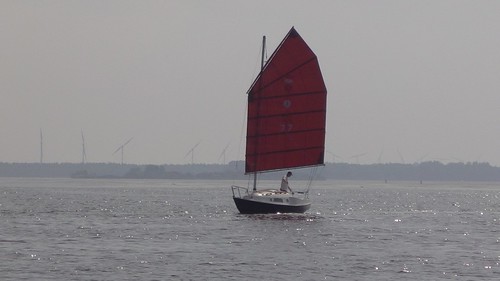 We rafted up for some lunch, and soon after we were joined by Marcel on Dulcibella. 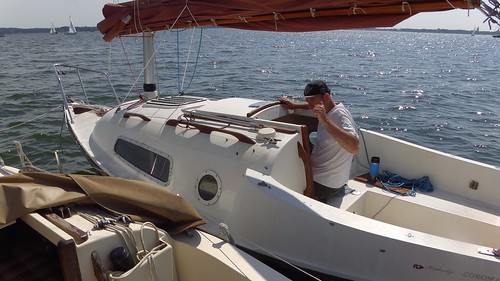 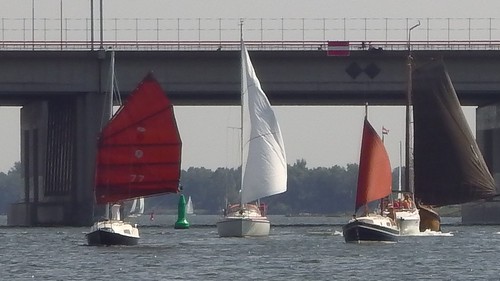 We spent the evening in Kinselmeer, just east of Amsterdam, and caught the fireworks from SAIL Amsterdam 2015. 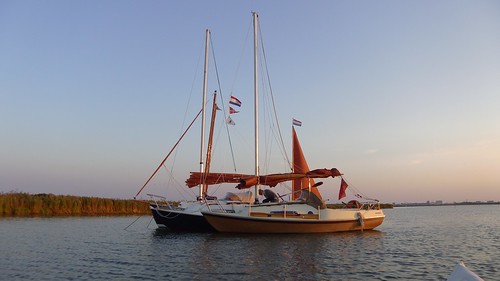 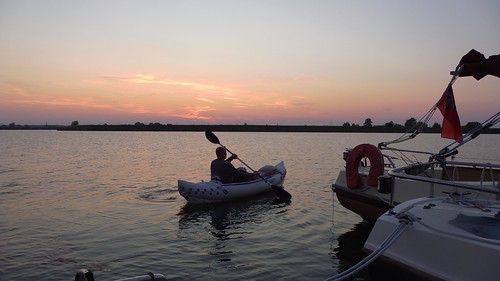 And we were joined by a swimmer from a nearby Etap.  I went to visit them and they showed me how the boat had foam-filled compartments to make it unsinkable.

In the morning there was a strong wind from the east, and Antoine didn’t seem sure that we could sail out of the narrow exit to the Kinselmeer. I was sure I could do it, and soon enough he found out that flat sailed junk rigs certainly can go to windward! 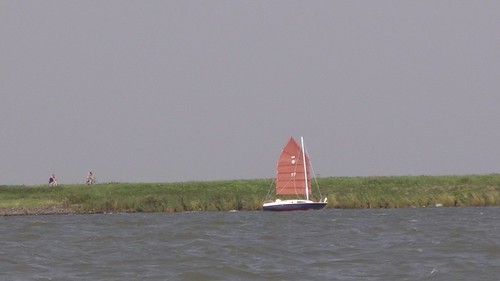 The Markermeer was rough with steep short waves, as I’d been warned, and I was soaked with warm water several times as we reached north to Edam. It was an excellent day.

And here’s video of Tammy and Siskin together.

I met Marco and Jan aboard Marco’s Wharram catamaran Stern when I was windbound in Rye at the start of my Netherlands cruise. They were waiting for the same wind change as me, and we had several long chats and meals together. 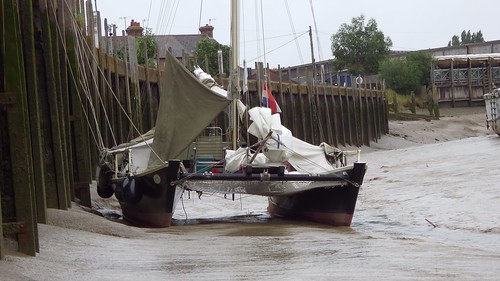 Macro had bought Stern in Scotland and extensively rebuilt and improved her. Like Tammy Norie, she was a boat in the DIY spirit, and Marco had a lot of knowledge in common with me. What’s more, he too had a newly fitted self steering system — a Mr. Vane — and was just getting to know it.  Jan was an older chap with a friendly twinkle, and though we weren’t able to talk as fluently, he clearly had a great deal of knowledge and experience.  They gave me many tips for the Netherlands.

Neither Stern nor Tammy are particularly easy to handle through locks, and at one point we missed two cycles as numerous big white cruisers zoomed past us and filled them up.

“Typical Dutch,” said Marco, “always wanting to be first. Dank u wel,” he called to the passing yachts, with sarcasm that transcends national boundaries. “Friendships and marriages are made and broken in the locks.” 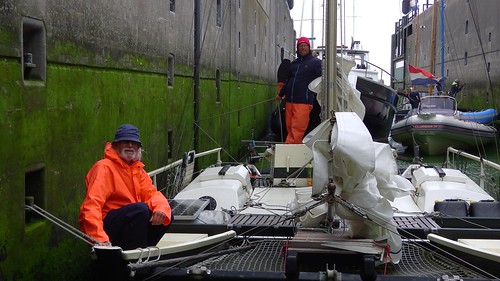 We ended up sailing together to the Netherlands, through Zeeland, up to Amsterdam and through SAIL Amsterdam 2015, finally saying goodbye in the Markermeer as Stern headed home towards Oostmahorn.

Our journey through Zeeland was not very pleasant, with rain and headwinds a lot of the time. But after we came through the Krammersluis into the Krammer we had a couple of hours of downwind fun, and filmed each other sailing. Here’s some video.

Thank you Marco and Jan, for excellent company and new friendships.

Addendum: It turns out that this boat that I saw in Harlingen, the Bruinvisch, is owned by Jan and his brother. Jan did tell me he had a boat there, but I didn’t know which. 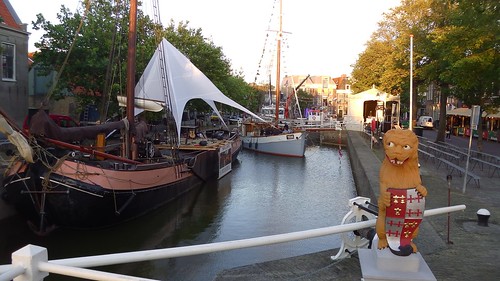 Martin Roberts, my crew for the passage back from the Netherlands across the North Sea, asked for a copy of the log pages from the journey. I thought you all might be interested in seeing them. They’re fairly typical of my log book. 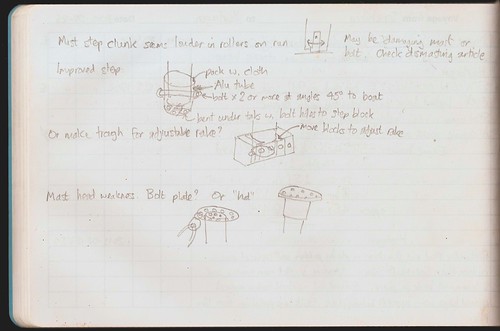 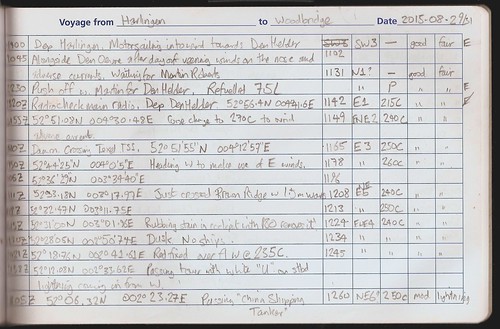 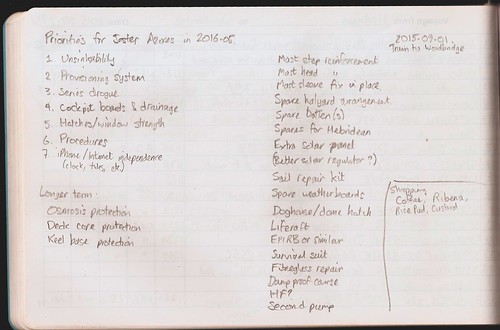 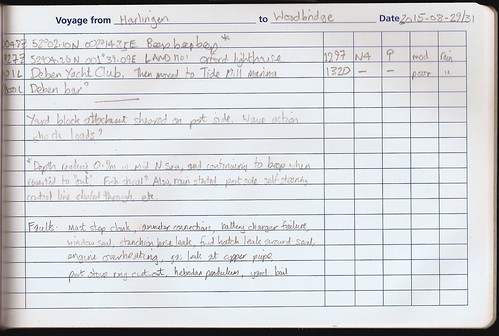 The title of this post is a bit inaccurate, since I did no construction today at all. But I did bring the Hebridean frame, vane, and mount bearing to Tammy Norie and worked out how they will fit.

The first job was simply to locate a good position for the Hebridean on the stern.  This was quite easy.  As you can see from this picture, the Hebridean looks made for the boat, with its trunk angle nicely matching the top angle of the transom. 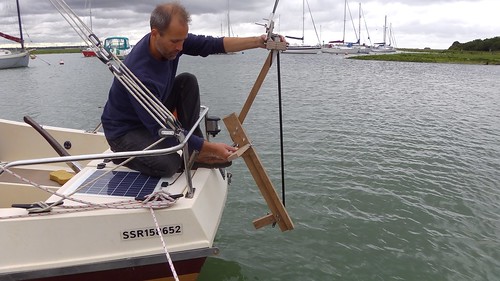 There’s plenty of clearance all around, but the end of the pivot pin (resting on my toes) is just outside the boat. The mount bearing will sit here. 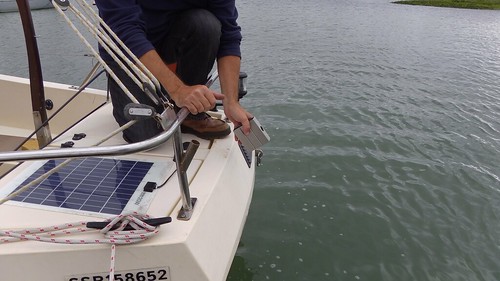 It will be sandwiched between two planks which will be fastened to the boat. After a bit of thought, it’s clear that I should cut planks that are bolted down to the top of the transom, on the 80mm-wide flat part of the deck, but then are shaped to rest on the top slope of the transom to bear load.  This will keep the mount clear of the stern lockers and anything else going on in the cockpit.  I’ll make a proper diagram later and share it.

I also checked how the Hebridean will act when it swings.  I have yet to determine the correct length for the outriggers, and it’s not clear how I can do that before mounting and rigging the whole thing. There will be pulleys suspended from the stern rail taking lines from the outriggers to the tiller.  At the angle shown in the photo below the outrigger is exceeding the height of the rail, and that means the gear will stop working.  I wonder if it will have enough movement. 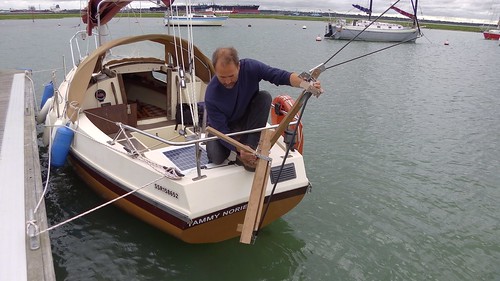 One possible refinement is that the Coromandel’s tiller could be adapted to be reversible. 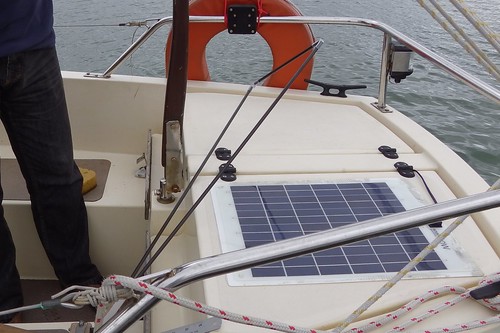 Here you can see the tiller when vertical.  By making the bottom bolt removable (using an anchor pin, for example) the reinforcing the top link, the tiller will swing back over the stern lockers.  This would allow the Hebridean to connect without the usual cross-over of its lines, and also mean that the cockpit is clear then using the self-steering.

Anyway, I now have enough measurements to determine the correct length for the pendulum.

The rest of the day was taken up with a wonderful sail from Warsash to Fareham with my friend Gareth and his nephew and niece, Kyle (12) and Cara (10), neither of whom had been sailing before.  I’ll let the Met Office tell you about the weather:

We came out of the Hamble and messed around in Southampton Water for a while. The winds were strong, but it was also sunny and warm. The others weren’t due back until the late afternoon so we decided to take Tammy home to Fareham. It was a delightful run before a force 7 in 1m seas, and once again we had the Solent to ourselves. 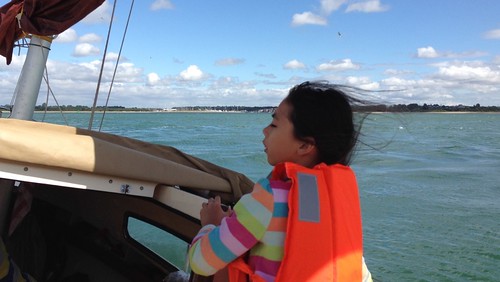 I also got to measure the distance from Tammy’s stern deck to the stern wave (about 310mm) while doing 6 knots in front of a force 7. That’s probably a good working figure for the Hebridean.

I will be sailing again tomorrow, and then I will need to return to work for a few days, so construction may be suspended for a short while.

Filed under Constructing the Hebridean, Equipment, Logs, Repairs and Modifications, self steering

My sailing has had a very late start this year due to illness and injury, so I was absolutely delighted to finally get out on the water last weekend, and then get involved in a rescue (of sorts) within an hour of casting off!

Friday night was dark and stormy, and I spent a lot of it in the bar at the Fareham Sailing and Motor Boat Club chatting to Bob, whose large centre-cockpit cruiser was on the club pontoon next to Tammy. He mentioned his ideas about circumnavigating Europe, and I told him about the Rhine-Main-Danube canal and my ideas for a trip through the Black Sea. “So I’m not the only one who thinks about these things!” he said.

No indeed. Next summer I hope to be in the Jester Azores Challenge, which means I’ll wind up in the Azores. Rather than heading straight back, perhaps I could sail in to the Med. Even more ambitious, my friend Tan has just taken up a research post at Eilat. Could I sail through the Suez Canal and round to Eilat? And then back via the Bosphorus and Danube, finally popping out at Rotterdam?  Maybe, maybe.

On Saturday morning I waited for my friend Chris to join me on board. I finally rang him at 10:00 and caught him still in bed! It was too late for him to join me before his work, so I set off solo. I made a couple of turns up and down Fareham Creek with Tammy being knocked over by 30kt gusts through the trees and buildings on the bank. It was great to be back on board, great to feel her move, and to be able to deal instantly with the changing wind in a tight space thanks to the ease of handling of the junk rig.

Then I set off downstream into Portsmouth Harbour proper.

Tammy never fails to turn heads, and I greeted people as I passed. One chap seemed particularly interested, standing in the cockpit of his moored cruiser.  Just as I passed he called out “Can I have a lift? I’ve dropped my paddle!”

This confused and intrigued me and I tacked back up towards him. He gestured at the kayak on tied to the yacht’s rail. It wasn’t his yacht at all! He was out in his kayak, had dropped and lost his paddle, and it’d been quickly blown away on the persistent 20kt winds. I invited him aboard and we tethered his kayak to the stern.

His paddle was likely on the mud downwind, but we couldn’t see it.  The falling tide would’ve stranded Tammy for some hours if we went over to look.  “Don’t worry,” he said, “I’ve got another one on my boat. Can you take me there?”

“Of course! I’m only out here mucking about. It’s no problem at all.”

So we beat our way back up against wind and tide towards the Royal Navy Sailing Association pontoons. There he showed me his rather magnificent steel cruiser and made me tea. He’d sailed her back from the Algarve and has been working on her for the past three years. She’s just the kind of boat I was thinking of when I was thinking of a larger boat. 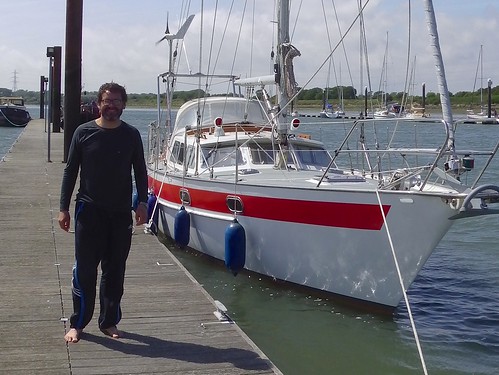 Satisfied that Dave was no longer in mortal peril I set off back downwind towards Portsmouth and Gosport, borrowed someone else’s buoy within sight of Gunwharf Quay for a rest, and then caught the flood tide back up to Fareham.

What a lovely day!