I’m planning to sail from the Solent to Purbeck and Poole next weekend in company with Chris Boxer aboard Tammy’s sister Emmelène. This should be a fun outing. I’ll be meeting family there, but more interesting for my readers, this will be a good chance to compare my flat Hasler-McLeod rig with Emmelène’s split rig under a variety of conditions.

As always, if anyone wants to meet up please get on touch. (My nephew and niece get priority as crew on Tammy Norie, but have not yet confirmed.)

It’s Tankfest this weekend at the Tank Museum in Bovington, in the very lovely Isle of Purbeck. My brother and kids are likely to be going on Sunday.

I can’t quite sail to Bovington, but I can sail to Wareham nearby. Wareham is upriver from the west end of Poole Harbour, and the journey from the Solent to Poole is well known.

The plan would be to catch the morning ebb tide from Fareham at 06:45, sail through the Solent, across Christchurch Bay, into Poole Harbour, and up to Wareham. There are lots of possible stops and sights along the way — Cowes, Newtown Creek, Yarmouth, Beaulieu, Lymington, Mudeford, Christchurch. If things go really well I might sail further to remarkable Lulworth Cove.

PassageWeather predicts fairly light south and south-easterlies, so it ought to be very pleasant. The prevailing winds are westerly, which would make it an uphill slog. I’ll need to look at the weather systems and make my own prediction too.

But it could be a very nice long weekend trip!

My plans for the weekend worked out well. I caught the afternoon tide out of Fareham, down to Portsmouth, then out and across to Bembridge.

It turned out that the Fareham Sailing and Motor Boat Club had an organised meeting and dinner over at Island Harbour Marina on the Medina on the Isle of Wight, but I didn’t find out about it until Saturday lunch-time. I had a go at beating up towards Cowes to meet them in the morning, but it was choppy and would’ve taken many hours. The forecast for Sunday was even stronger westerlies. So I decided to reach over to Bembridge and reach back the next day.

Nothing exciting happened, but then it is the Solent. Here’s a nice picture of Bembridge Harbour. 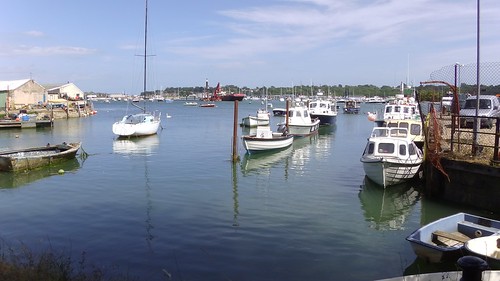 I’ve selected a few other nice ones for this album including a picture of Tammy Norie with a spinnaker at her bow.

Engine hours: zero. (OK, I did run the engine for five minutes to stop the fuel gumming up and make sure it worked.) Sailed solo upwind onto the pontoon at mid tide in Bembridge in a very stiff breeze and a tight space.

The two important things for me, this weekend, are (1) that Tammy is at last feeling like she’s back in one piece, with nearly everything in the right place, and ready to go, and (2) I am feeling like I’m back in one piece — able to use my left arm almost all the time without difficulty. I was told it would be one year to recover, but I think I’m 80% of the way there after six months. I think I can confidently plan some more adventurous sailing for the rest of the year.

If I’m to take part in the Jester Azores Challenge in May I’d better get going!