Before I set out on my Netherlands cruise I bought a main VHF radio for Tammy Norie. I got by all last year using a handheld Icom IC-M1Euro V (and very good it is) but I did notice the lack of range and the inability to talk to nearby boats, even though I was always able to get in touch with the coastguard. I was also thinking about AIS. When I want to sleep offshore I’d really like an alarm if a ship comes near. But I’m also reluctant to load Tammy Norie up with gadgets, in spite (or perhaps because of) my technical background.

Then I found the Standard Horizon GX2200. This radio kills three birds with one stone. It’s a VHF, but it also contains an independent GPS, and it can receive and interpret AIS signals and warn of approaching shipping. Since it’s a DSC radio it can also buzz the radios of approaching ships even if they’re not listening on channel 16. This not only gives me a wake-up call if there’s a ship approaching, but a way of talking to them to make sure they’ve seen me. An extra GPS is welcome, of course.

I bought the unit not long before setting off for the Netherlands and tested it on board with the antenna in the cabin. I also thought about how to fit the antenna to the masthead and run the cable to the radio.

I noticed that the masthead had four tapped holes, but when I tried to fit screws into them I found that they were slightly smaller than 5mm and quite a bit larger than 4mm. Probably some imperial size. So my first step was to tap them to 5mm. I’d bought a small scrap of stainless steel strip from Percy M See in Fareham, and cut holes and sawed it into shape using the dock pilings at Rye as a workbench. This held the antenna nicely a little way from the forward side of the mast.

I could have just dangled the VHF cable down the inside of Tammy’s mast, it being a simple tube, but I realised that it would rattle around. Indeed, Marco on Stern was complaining about his cable doing exactly that. So I thought about ways to pad the cable. I also thought about buoyancy.

The top section of the mast weighs about 30kg. A quick calculation gave its interior volume as about 40 litres. If it were completely sealed, it would float! That was not likely to be possible, but I did think about packing it with closed cell foam, or air-filled bags. Then I realised I could use bubble wrap. It wouldn’t enclose the entire volume, but it would displace a lot of water, and delay water ingress, so that if I ever did drop the mast overboard I’d have a lot more time to deal with it. And if Tammy ever turned on her side or even turtle for any length of time it would help her to right herself.

I’d seen rolls of bubble wrap for sale at B&Q, but it turned out that Mum and Dad had a great big roll of it going unused in the attic. I’d stuffed it aboard Tammy Norie before leaving for the Netherlands.

The first step was to remove the mast.  I used the low tide and high wall in the harbour at Rye to lift the mast using (appropriately) the mast lift.  Soon it was lying on the grass next to the boules pitch. 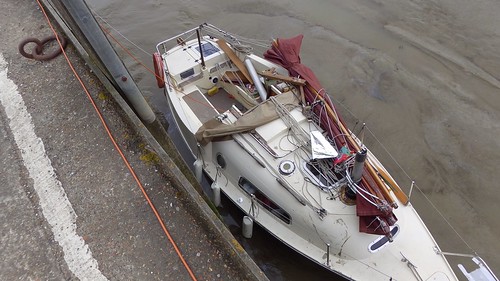 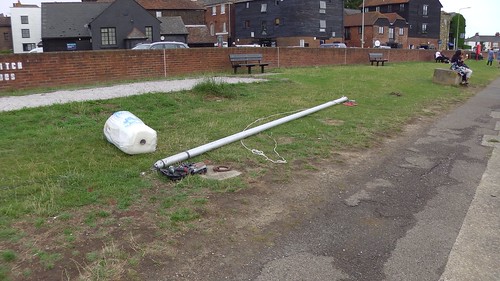 At this point a chap turned up and started asking questions about what I was doing and about Tammy Norie. He was Mike McCarthy, a local sailor with a wealth of experience and stories, who was maintaining his own boat not far away. He offered to help.

I visited Rye DIY, just along the street from Tammy’s berth, and bought two 3m lengths of domestic cable conduit. I joined them with duct tape. It was quite easy to arrange the bubble wrap around the conduit in a long helix and shove the whole thing up the mast.  The conduit helped keep the whole thing stiff. 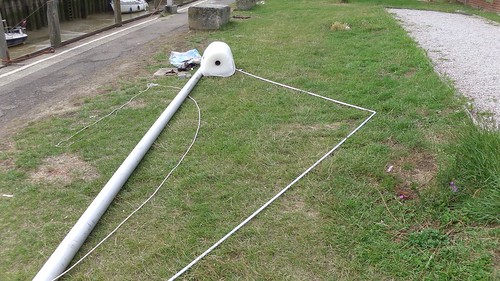 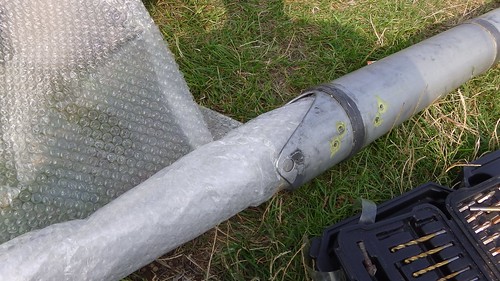 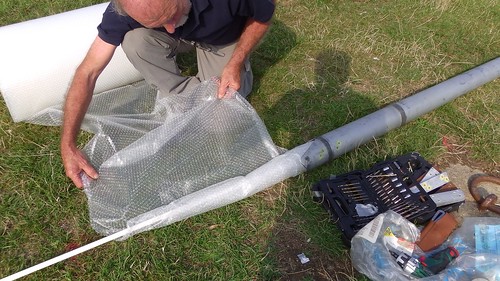 We then caught hold of the top end of the conduit through the hole at the top of the mast and threaded the VHF cable and a bit of mousing string through for good measure.  The mast went back down to the boat and we threaded the cable through the existing hole in the bottom section. I caught hold of it using a tool I’d made for fishing things out of CUYC Kestrel’s mast years earlier. I say “tool” but it was just a bit of bent coat hanger that I’d kept hold of.

By this time it was dark. Furthermore, a pair of enterprising gulls had broken into Mike’s shopping bag and eaten his dinner. We went and bought fish and chips and ate them aboard while swapping sailing stories. A great time was had by all!

The next day there was torrential rain and thunder as weather fronts passed overhead. 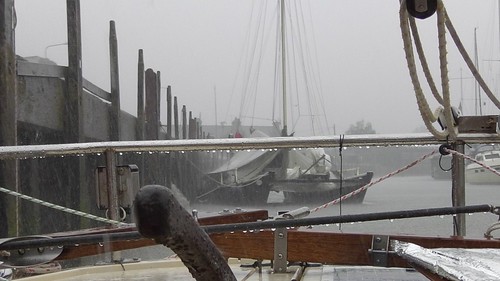 This was a good thing, as it signalled the change in wind direction I’d need to depart for the Netherlands.  I used the opportunity to finish the interior wiring and install the radio. It worked well, and picked up AIS signals from ships out in the English Channel some way away.

Here’s a picture of the masthead with the antenna in place, taken later in the trip. 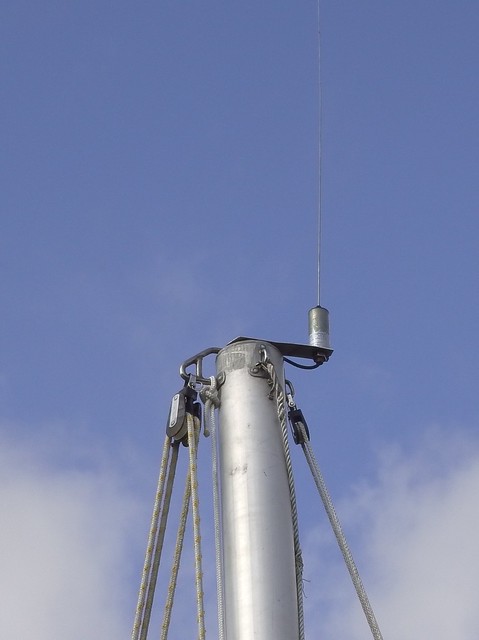 Now, what I’m not telling you is some of the mistakes we made.  We had several attempts at threading mousing string through the mast.  My first string was some nylon orange stuff that had come with the boat, dangled through the mast while still attached using some washers. This got snagged and broke. I tried with it again but it got worse. Then I bought some smooth string from Rye DIY and threaded that. Initially we pushed the conduit over the string and spent ages shaking it through using a weight made of a piece of wire. After getting the conduit and bubble wrap into the mast another friendly local then pulled the mouse out of the conduit, thinking this was somehow helping. Poor guy — he was very embarrassed. But eventually I realised that it was easy to push the thick VHF cable through the conduit anyway, so the mouse wasn’t really needed. We optimistically shoved the bubble-wrapped conduit up the mast and found that we could retrieve the end through the hold and just push the cable through. All of this mucking about took several hours.

Some of the stories that Mike and I swapped that evening involved people not telling the whole truth about how difficult jobs are on boats, but instead presenting a fait accomplis as if it were all easy and they knew what they were doing all along. It’s rarely so! Mike told me about a magazine article that described several weeks of faff and mistakes as an easy weekend job. I won’t name any names, but just be sure to take those articles with a pinch of salt. Sailors have plenty of salt available, after all.