It’s been three years since I first wrote about making new sails for Tammy Norie. Since then I’ve been delayed by illness and injury, and have been getting along quite well with her existing sail, but now I’m planning to make a move.

Seeing Emmelène with a split junk rig was inspiring, because of improved light wind performance and especially the significant improvement in boat balance.

But mostly, of course, I want to play around with the rigging.

I hope to write more about all these activities and cover the actual construction and testing of a new rig, so I’m starting a new blog series called “A New Rig”.

Be warned that what I do is going to be experimental. This won’t be a step-by-step guide on how to build a junk rig written by an experienced constructor. (You can find that information at the Junk Rig Association.) As usual this will be me trying out ideas, making mistakes, and possibly discovering some new and useful stuff.

Chris Boxer has written about our recent meeting at Bembridge on the Isle of Wight. You can find his post on Emmelène’s blog. 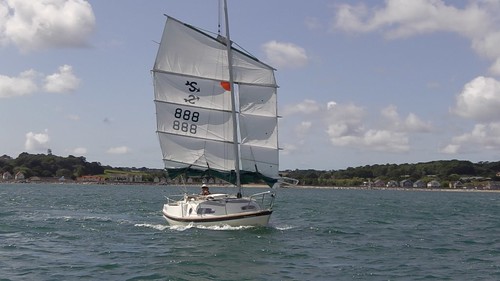 Emmelène has a split junk rig, which means about a third of the sail area is ahead of the mast and formed of conic sections called “jiblets”. These direct airflow over the main part of the panels abaft the mast. The slot effect helps the air stick to the back of the mains and so increases the stall angle, and thus how high you can point. To make this work the luffs of the main sections need to be tight near the mast, like the luff of a Bermudan main.

It’s quite like sailing a stack of small pivoting Bermudan rigs! 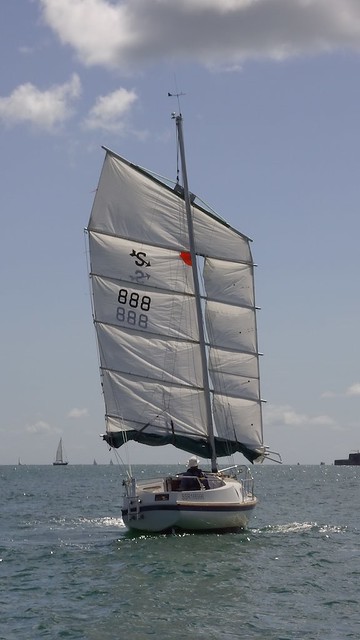 It’s often said that the Coromandel’s mast is too far back. Tammy certainly suffers from weather helm, especially on a reach. But Emmelène has none at all. It’s quite spooky.

If anything she could do with moving the centre if effort aft a touch. The sheets are perhaps a little too relaxed and sometimes it was hard to persuade the sail to swing out.

This is no fault of Chris’s. He bought the rig second-hand to replace the poor “hi-power” rig that came with Emmelène. In fact it was the exact rig the Practical Boat Owner featured in their comparison of junk and Bermudan rigs (using identical Splinter 22s I think) a while ago. 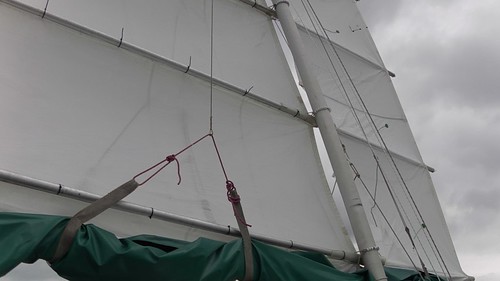 I look forward to meeting Chris again and perhaps trying it all out in more varied conditions. 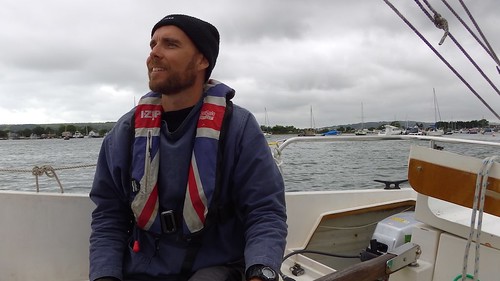 On Saturday I went to Brighton to see Jake McLewee’s Sinobee, a Newbridge Coromandel and sister-ship of Tammy Norie. Once again it was time to put on my deerstalker and uncover Sinobee’s history from the evidence. We discovered quite a few interesting differences. 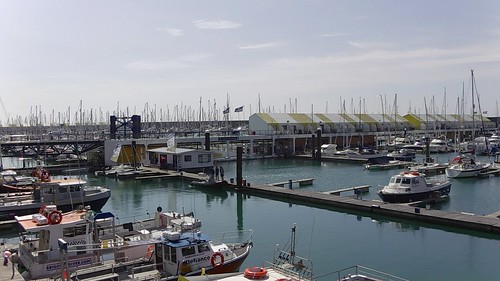 Firstly, Brighton Marina is gargantuan. Jake told me it was the largest in Europe for quite a while, and I can well believe it. The marina occupies reclaimed land below the cliffs east of Brighton, and the approach reminds me of getting in to an airport. Half of the area is occupied by a food and entertainment complex the size of a small town.

Sinobee was moored up in the boatyard pool, waiting for her turn on the crane to have her mast stepped. 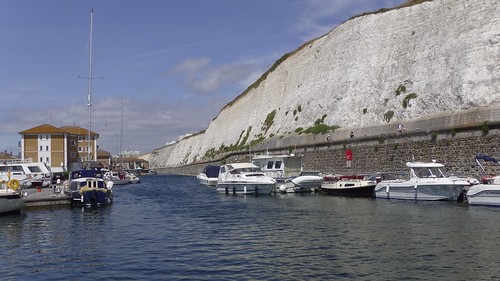 She has a one-piece mast (no hinge) and so once it’s raised Jake won’t easily be able to get to the mast head to alter rigging, add the VHF antenna, etc.  I’d almost forgotten about this problem, since I can dip Tammy’s mast in a few minutes whenever I want.  There are a couple of strange things about his mast. Roughly the top quarter has been painted. 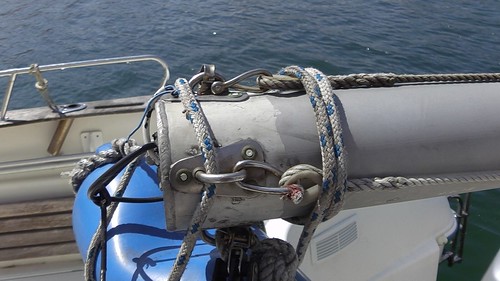 We’re note sure why this is, but speculated that it’s to protect the mast from chafe from the yard.  The other odd thing is that the mast has been extended by about 300mm at the base. 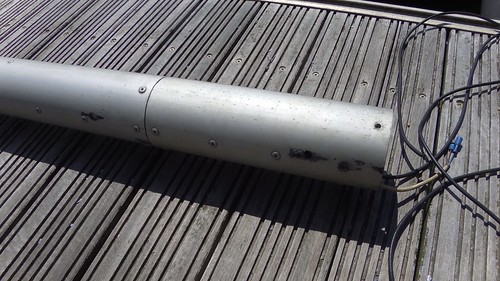 Clues to this mystery were revealed when we unwrapped the sail from its cover. Jake had so far never seen the sail, so it was quite a reveal! Unfortunately we didn’t have space to lay it out flat and see its shape, but we soon learned that it wasn’t an original Coromandel sail like mine.

The battens are fibreglass tubes, backed with narrower tubes on the other side. What’s more, they’re very bendy. The sail is cut flat, but every panel is tapered, so it must be a fan-shaped sail. I think it might be a Sunbird 90’s rig. Part of the reason for this is that it was made by Chris Scanes, who often works with Robin Blain of Sunbird Marine. I’ll write and ask Robin if he remembers Sinobee. 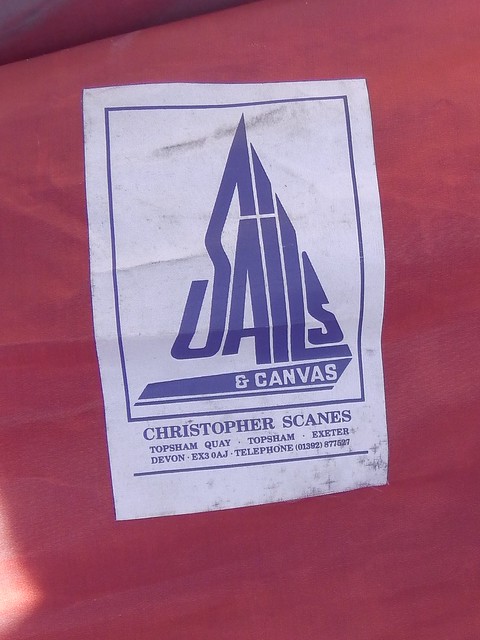 The sheeting system is a complete mystery and makes little sense to me.  Various spans had long loose tails not tied to anything. I started a thread on the Junk Rig Association forums to see if anyone else had any idea. This diagram shows what’s there as far as I can tell.

There may well have been a sheeting system designed to go with the sail, so it’s important that we figure out what was intended. In the meantime we can put together something sensible from the blocks and lines he has at the moment. If we can find the mainsheet or its block!

Sinobee’s mast cone has clearly been completely rebuilt.  It’s considerably thicker than the original cone, and the fibreglass has been coated, but clearly didn’t come out of a mold. I broke my mast cone the first day out with Tammy Norie. I’m now pretty convinced that this is a weak point in the design, and any Coromandel owner would do well to beef up their cone with extra layers of fibreglass. 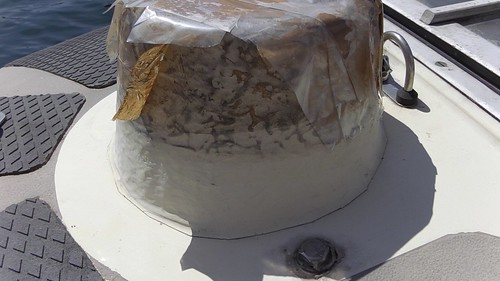 Sinobee’s pushpit has been replaced. It’s definitely a modification, rather than an improvement by Newbridge, because you can see the filled holes for the old pushpit’s feet on the deck. The new pushpit has a rotating fixing for the mainsheet block at the extreme port quarter. 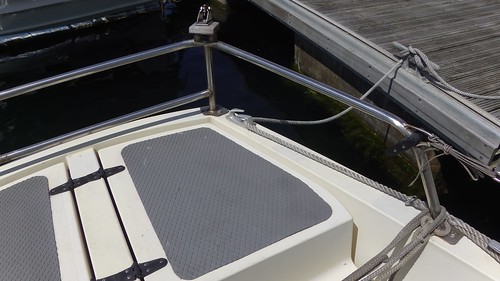 Robin Blain recently advised me to change my block fixing for a track.  I often find my mainsheet block’s offset position a bit unhelpful. I have to adjust the sheet when tacking. Sinobee’s is going to be worse, I think.

Sinobee has a few differences to the foredeck.  A rather handsome Sampson post replaces my large low cleat, and there’s an additional cleat on the starboard side. 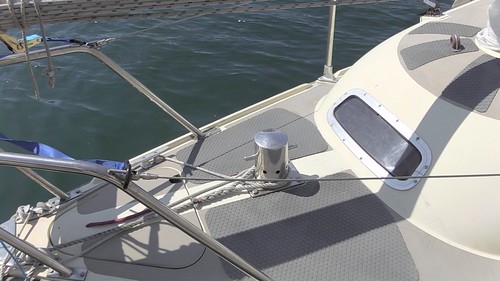 I can see the advantage of this.  Even though my cleat is large, I often find it gets crowded. Sinobee’s post will nicely handle the anchor chain running out of the locker and over the bow fitting. In fact, Sinobee has a welded stainless steel bow fitting, unlike Tammy Norie’s molded aluminium one. 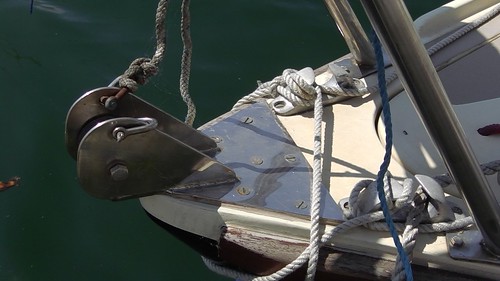 Those are all the main differences that other Coromandel owners might find useful, I think, but if you have any queries please do leave them in the comments below.

Presenting the Tied Hybrid system: can it work?

I’ve been pondering new sails for Tammy Norie for some time. My goals are to increase performance in light winds and improve upwind performance while keeping things simple, strong, and maintainable. I believe that I’ll need to increase sail area and add camber to my sails to achieve this. I’ve briefly described various methods in my earlier post New Sails for Tammy Norie . I had more-or-less settled on an HHH system for simplicity and maintainability.

On Friday I was looking at figure 10.2 from Practical Junk Rig showing how to attach the sail to the yard.

Then it struck me: why not attach all the panels to the battens with string? One weekend-long brainstorm later, and I present to you the Tied Hybrid system for Junk Rigs.

The idea is simple: cut the main panels flat with reinforced seams with eyelets. Then tie the panels to the battens with loops of cord. By adjusting the lengths of the loops you can adjust the camber of the sail in pretty much any way you like. Sprung cord locks allow you to do this easily, but you can of course use stopper knots. If the battens are smooth stainless steel tubes then the loops will slip round easily when tacking, flipping the sail camber to the other side.

In addition, it’s a simple matter to make split panels and get a split junk rig with jiblets. It wouldn’t even be very hard to carry both split and full-length panels on a voyage for different conditions. Since all the panels are the same you can get a lot of flexibility.

This is so simple that I have trouble believing that it hasn’t been tried and somehow failed. I’ll be interested in feedback from the members of the Junk Rig Association about that. If it hasn’t been done then I’ll definitely be giving it a go. It should be easy and cheap to construct, and allow for a lot of research into sail trim.