After over 25 years in a garden you’d expect a few things to have aged. Amazingly, most of Tammy Norie’s systems are in great condition, thanks to diligent care by Jack and Sheila Robbie, the original owners. However, one of the seacocks had seized: the big one in the port cockpit locker used for the heads (toilet) drain.

We sprayed it with various kinds of penetrating oils over several weeks — WD-40, PlusGas dismantling lubricant, cold shock — but no luck. Eventually the handle began to bend. Time to remove the whole thing and buy a new one.

The nuts came off after a quite of effort, but then the whole thing was glued down with ancient sealant. Here I am trying to pry the seacock from its plywood mounting pad without doing too much damage to anything. 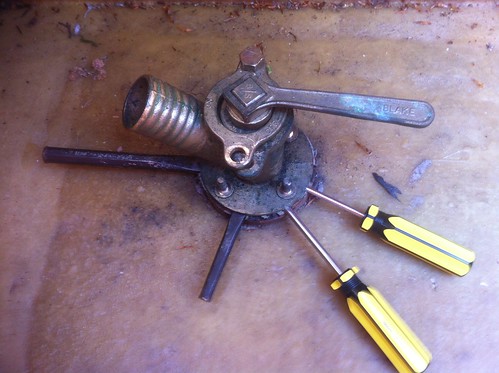 Eventually, though, Dad suggested knocking the bolts through to the outside of the boat. I wasn’t sure about doing this, but with him watching carefully I put nuts on the ends of the bolts (to prevent thread damage), braced a block of wood against them, and hit the other end with a rubber mallet. And out they popped. It turned out they were coach bolts fed through a brass plate that was hidden under the antifouling. 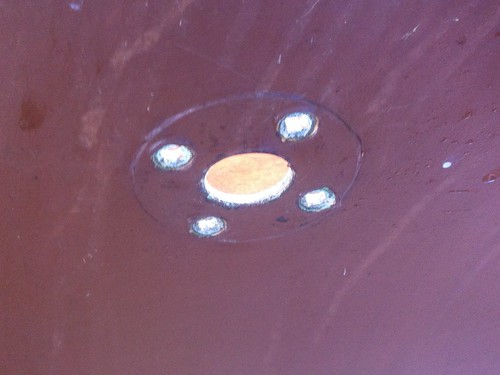 Once the bolts were out I was able to twist the whole seacock right off the fibreglass by hand, reducing the old sealant under the wooden pad to powder. And then it wasn’t too hard to twist the pad off the seacock and clean it up for re-use.

This was no trouble to fit. There are a few improvements over the old model. Firstly, there’s a a grease nipple that should make it easier to keep lubricated without dismantling and might help if it ever sticks again. Second, the retaining plate is now held down by screw-head bolts. We think this might be to prevent over-tightening. 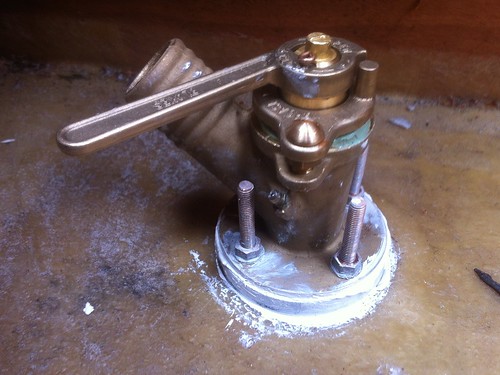 In the long run, though, I might remove the sea toilet altogether for solo long-distance sailing.

Filed under Repairs and Modifications, seacocks