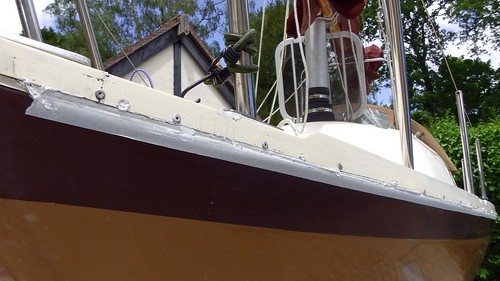 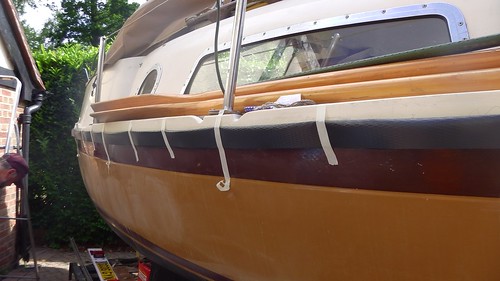 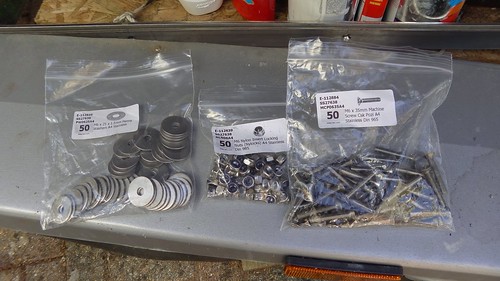 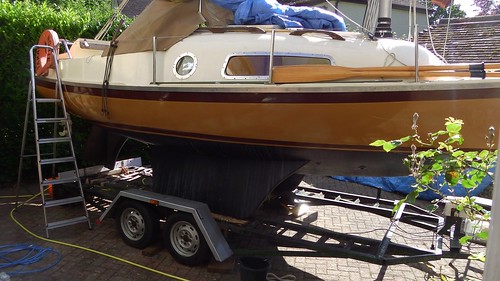 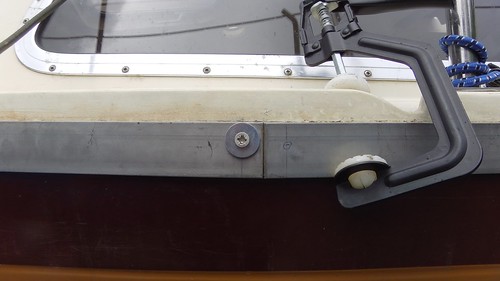 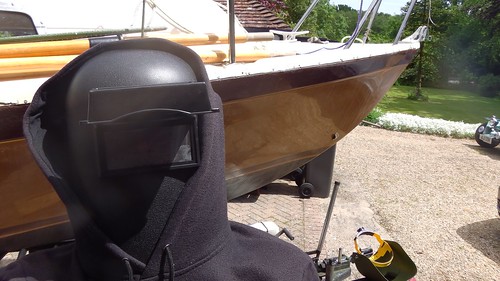 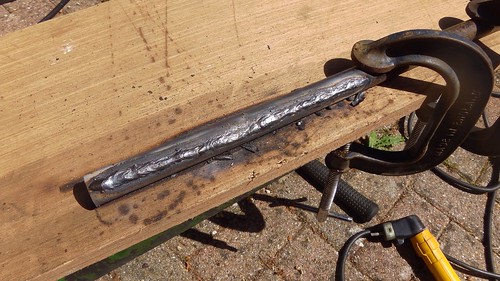 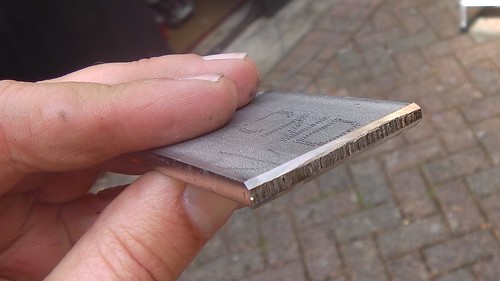 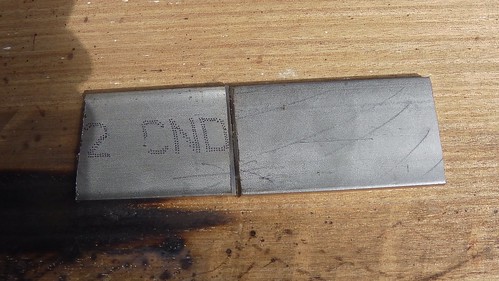 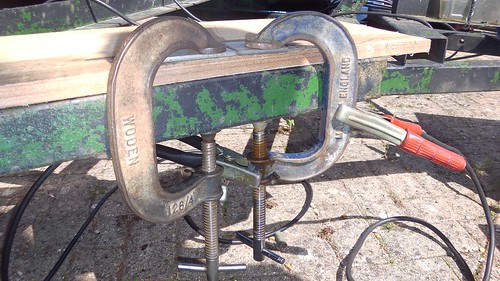 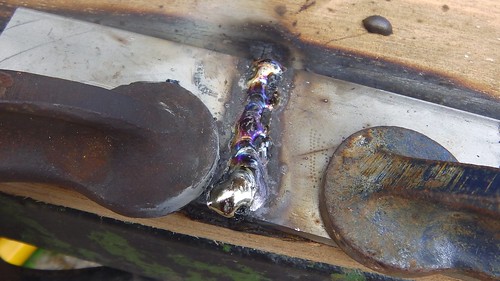 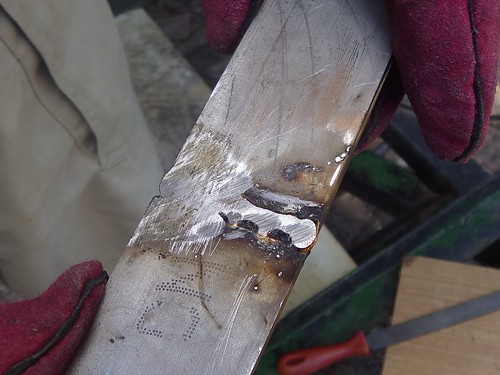 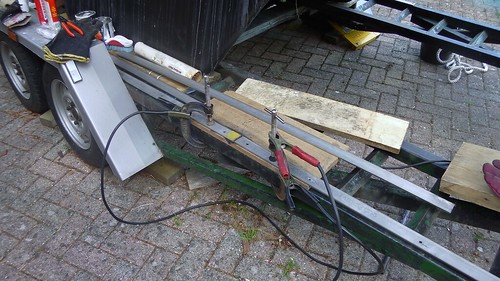 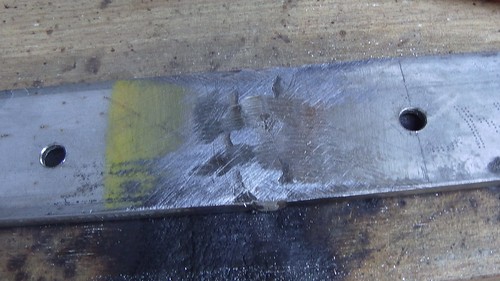 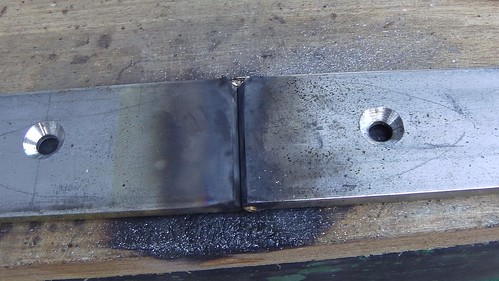 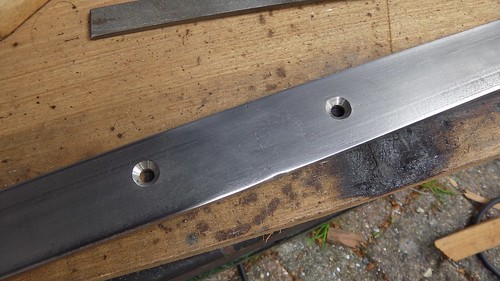 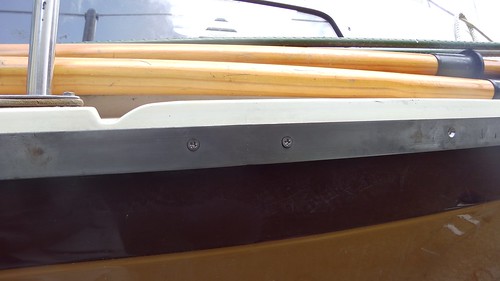 I decided to replace Tammy Norie’s rubbing strakes with stainless steel bar, forming a bomb-proof chainplate for a series drogue and other attachments, as I described in my post Rubbing Strake and Series Drogue last August. Here’s a video about removing the old strakes.

(I was prompted to get this video up early by this thread on the Corribee & Coromandel group.)

The port side strake was secured by 25mm pop rivets that didn’t penetrate right into the boat. Instead the heads were buried in what appears to be a wooden strip glassed in on the inside of the hull-deck joint. On the starboard side the rivets were pushed right through and the heads were visible inside the hull.

We removed them on both sides by drilling the tops off with a 5mm bit, allowing the strake to come free, then either knocking through the remainder with a punch or drilling it out. Most of the holes ended up fairly clean, but some were a bit of a mess.

The rivets will be replaced by countersunk M6 Pozidrive machine screws in marine stainless steel backed by penny washers and nyloc nuts, all supplied by Sea-Screw.  I will first fill the edges of the rivet holes with marine epoxy filler to tidy them up, but also to ensure that there’s an even distribution of load between them all from the series drogue or other loads.

The same system could be used to put the existing strake back on, or replace it with another wooden strake. Since I’m using nuts and bolts I can make that choice later without further permanent changes to the boat. It’s basic engineering! This is one of the reasons I won’t ever use self-tapping screws or other non-removable fasteners. (And if that isn’t enough of a reason, see Attaching Hardware to your Boat by David Pascoe.)

The stainless steel bar for the new strake is 40mm ⨉ 5mm was provided by the friendly MG Metals for about £180. Unfortunately the maximum length they could provide was 4m, and the old strake is 6.25m long, so we plan to arc weld the strips together as neatly as possible. The total weight of the bar is about 18kg, so I reckon this modification adds about 12-14kg to the displacement.

To make the drogue attachments I planned a 40mm overhang at the stern and marked out a semicircle to grind off so that there are no sharp corners.  Here’s the marked bar end. 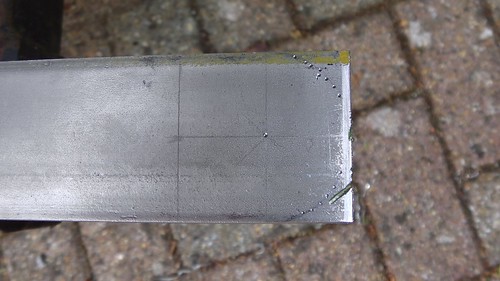 And here it is after a bit of hacksaw, angle-grinding, and drilling.  That’s an 8mm shackle rated to over 40kN. 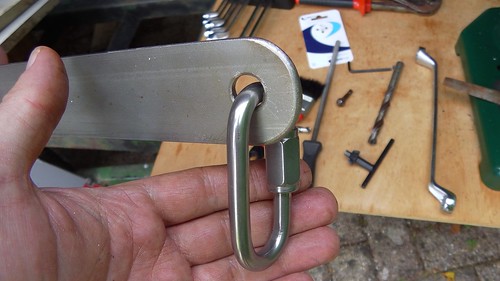 Here’s how it protrudes from the quarter. 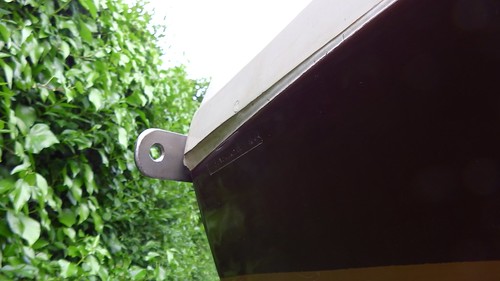 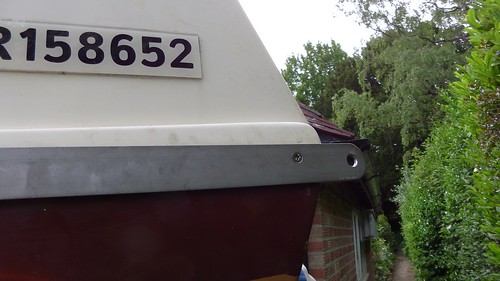 And here’s how the bar looks when held against the side of the boat, conforming to the curve of the old rubbing strake.  In fact, we used the dirt line left behind by the old strake as a guide! 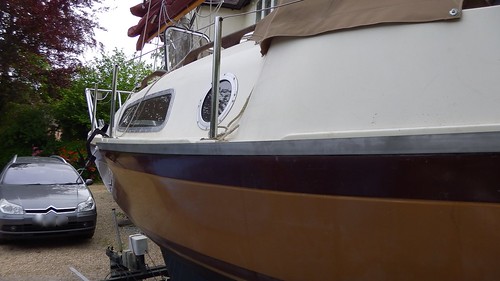 If you look carefully you can see that the bar is leaning outwards at the top edge.  This is because the hull deck joint curves upwards as well as outwards, and the bar naturally wants to bend along its thinner axis.  Later, we found that bolting the bar reduced this tendency, but not completely, so there’s about a 1.5mm gap at the top that will need to be filled with sealant.

In fact, I plan to trap a strip of padding behind the whole strake, to protect the hull from wear.  The boat and strake will inevitable flex when sailing and there’s bound to be some rubbing.  After investigating expensive double-sided foam tapes, I’ve decided to try some simple damp-proof course. I’ll see how it looks at the end of the season.

Here’s how the port aft section looks when screwed in. This isn’t the final job, but shows roughly how it will look. 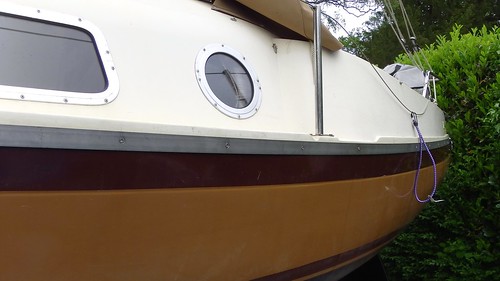 I don’t intend to polish the strake to a mirror shine, but instead get an even “brushed metal” shine that should be easier to maintain.

Here is the progress of the joint between the port aft and port forward sections of the strake.

As you can see the parts are butted together neatly.  The plan is to chamfer the ends and then tack weld the ends while they’re on the boat in position.  Then we’ll carefully take down the strake and form a proper weld on both sides, grinding down the filler metal until the weld is invisible.

A few notes about drilling. I’m using cobalt steel bits at low speed, as recommended by quite a few people on the Internet. This avoids hardening the stainless steel by heating.  I bought some cobalt drill bits from a local supplier, DTC and they’re been excellent. We’re drilling using a standing press rather than a hand tool.

Making countersinks for the machine screws has been more of a problem. Countersinks wear out quickly on stainless steel, though we’ve had success sharpening them with a file every few holes. The countersink tends to heat and harden the metal and then start skittering over the surface rather than cutting. I’ve now ordered a cobalt steel countersink and I’ll report back on how that works out. One thing I can say is that the quite expensive countersinks from B&Q are complete rubbish and should be avoided. In fact I’m going to avoid all of their “PTX” brand stuff in future as it appears to be poor quality Chinese junk. Somewhat ironic, really, given that Tammy Norie is an imitation of a Chinese junk.

That’s as far as we’ve got at the time of writing. The port side bars are drilled and fit. Now I’ve got the technique I think I can drill the starboard side in about a day. Welding, fitting, filling, sealing, and polishing are adventures yet to come.