Presenting the Tied Hybrid system: can it work?

I’ve been pondering new sails for Tammy Norie for some time. My goals are to increase performance in light winds and improve upwind performance while keeping things simple, strong, and maintainable. I believe that I’ll need to increase sail area and add camber to my sails to achieve this. I’ve briefly described various methods in my earlier post New Sails for Tammy Norie . I had more-or-less settled on an HHH system for simplicity and maintainability.

On Friday I was looking at figure 10.2 from Practical Junk Rig showing how to attach the sail to the yard.

Then it struck me: why not attach all the panels to the battens with string? One weekend-long brainstorm later, and I present to you the Tied Hybrid system for Junk Rigs.

The idea is simple: cut the main panels flat with reinforced seams with eyelets. Then tie the panels to the battens with loops of cord. By adjusting the lengths of the loops you can adjust the camber of the sail in pretty much any way you like. Sprung cord locks allow you to do this easily, but you can of course use stopper knots. If the battens are smooth stainless steel tubes then the loops will slip round easily when tacking, flipping the sail camber to the other side.

In addition, it’s a simple matter to make split panels and get a split junk rig with jiblets. It wouldn’t even be very hard to carry both split and full-length panels on a voyage for different conditions. Since all the panels are the same you can get a lot of flexibility.

This is so simple that I have trouble believing that it hasn’t been tried and somehow failed. I’ll be interested in feedback from the members of the Junk Rig Association about that. If it hasn’t been done then I’ll definitely be giving it a go. It should be easy and cheap to construct, and allow for a lot of research into sail trim.

Last Saturday I attempted to sail from Wells-next-the-Sea to King’s Lynn as the first step of my plan to bring Tammy Norie to Cambridge. The weather wouldn’t let me.

I left Cambridge at 06:35 carrying a sheet of 6mm exterior plywood that I planned to use for improving deck fittings, and reached Wells just after 09:00. 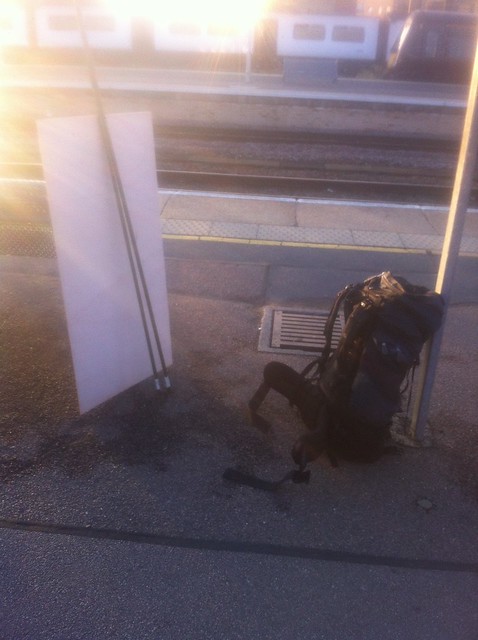 I bought Imray chart Y9 of the Wash, paid the harbour and dropped some money in the charity trust box as promised. I spent some time preparing Tammy and chatting to my neighbours on the pontoon — mostly motor cruisers who felt it was too rough to go out. Indeed, on my way out and over the bar I met four scurrying in, several of them ignoring the cardinal and channel buoys in their hurry to get out of the waves.

It was a bit choppy. The wind was westerly force 6 and the waves were short and high with quite a few breaking at the Wells bar. Once out past the cardinal it wasn’t too bad, but once again Tammy failed to make any progress to windward in the short sea. I made an hour-long tack northwards, trying everything I could to make progress, but when I tacked back to see how I was doing I found I’d actually slipped downwind about a quarter of a mile.

The wind was only forecast to get worse. It was clear I wasn’t going to get to King’s Lynn at all, and that it would be dangerous to have Hunstanton on the lee in such conditions. I could run back to Sea Palling and abandon my Cambridge plans, or I could scurry back in to Wells.

At this point I was a bit worried about Wells. On the way out I’d noted I had over 3m of water in the channel, and since then the tide had peaked and dropped a metre below that, so I ought to have 2m going in, if I was quick. But the tide was falling all the time and if I made a mistake I could be in quite a bit of trouble.

My main fuel tank was also running very low at this point. I’d been unable to fill up because Wells has no petrol station. So I transferred 4 litres from the reserve into the main, lifting them both into the deepest part of the cockpit to avoid getting any water in the fuel.

I was unable to raise Wells harbour on the radio or telephone, but managed to chat to the friendly guys on the beach patrol RIB who were watching the holidaymakers on the nice sheltered beach at the entrance to Wells. They suggested I come in quick.

So I did. Tammy’s 5hp engine seems just about adequate for pushing her into the wind, waves, and ebb current on the westward turn over the bar. I’m very glad I didn’t go for a smaller engine, and I kind of wished I still had the 10hp monster that I broke earlier. I’m absolutely sure that I couldn’t’ve got back in with a yuloh or scull. Engineless I would simply not have had the choice to enter Wells. Perhaps one day I won’t be on a schedule.

By the time I was at the beach chatting with the beach patrol guys over the side it was too late to get back to the town. The suggested I anchor just south of the outer harbour, and so I found a broad spot that still had some water and threw the anchor over the side. By the time I’d dropped the sail and made a log entry I was aground in a lovely spot. 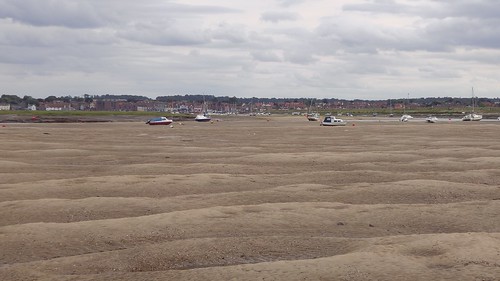 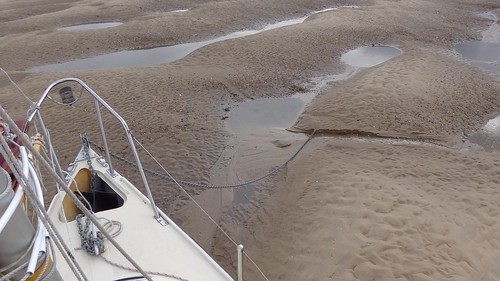 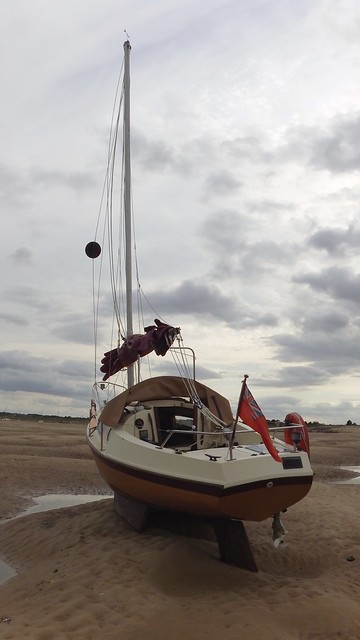 I spent the afternoon trying to remove the starboard middle stanchion and trying out some kite aerial photography. At about 22:00 I floated off and rode the very strong Wells flood back to the town, where my motor-cruiser friends were chatting and helped me tie up. “You must be exhausted,” exclaimed one, and I realised that they thought I’d been out at sea for twelve hours. I explained that I’d been on a sandbank for most of the day drinking tea and playing with a kite.

I spent most of Sunday fixing the stanchion. Briefly, here is what it was like in the morning: 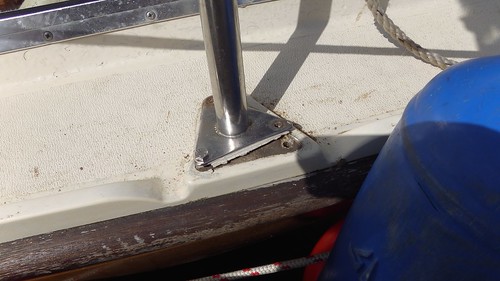 and in the afternoon: 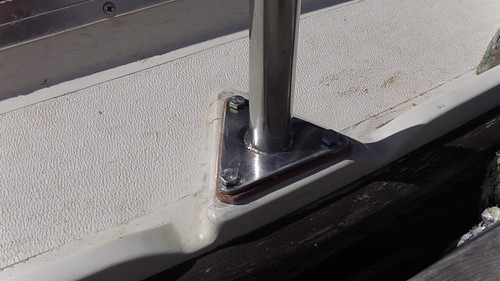 It is the prototype for upgrades to all the deck fittings, ensuring they are sealed and strong. I also fixed the tiller pilot, so it was an enjoyable and productive day. Even right inside Wells the wind was very strong, and nobody was going out.

I met an excellent chap named Alan in a temporarily mastless Maurice Griffiths boat called Stella Marie who had Haslar self-stearing gear “serial number 2” hanging off the back, and we had a very nice chat about the Jester Challenge and good places to visit in the Wash. At one point he mentioned that people used to have boat stamps in the old days, and I was able to produce mine and stamp his log book, much to our mutual enjoyment.

On the whole, getting stuck in Wells was no bad thing, and I’ll make another attempt on King’s Lynn as soon as the westerlies decrease.

Tammy Norie has her original sail from 1982 in almost pristine condition. It’s been admired by many people, and more than one person has described it as a textbook example of a Haslar-McLeod rig. That’s all very well, but it’s quite out-of-date with modern junk rig thinking. 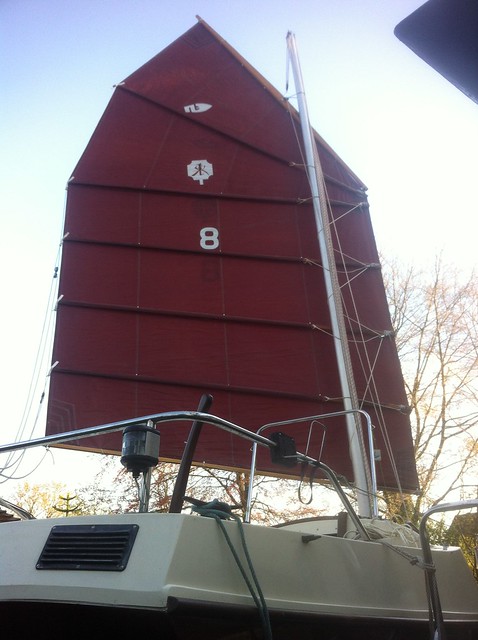 The main problem is that the sail is flat. There is no curve in the sail cloth. The battens may bend a tiny bit, and a little bit of curvature is developed by a small amount of slope in the battens, but it’s essentially a “barn door wing” and aerodynamically inefficient. It’s fine when used as drag downwind, when Tammy Norie leaps and surfs as well or better than any boat I’ve sailed, but it just doesn’t drive well to windward. 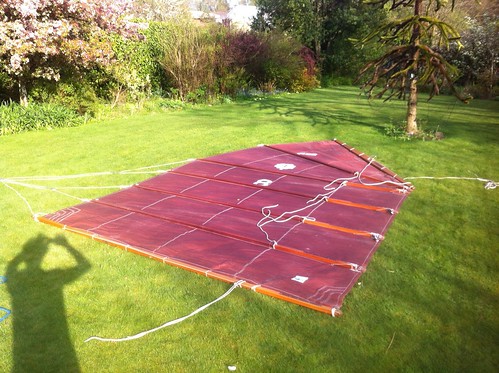 Ash Woods (of the Junk Rig Association) told me

The Coromandel / Corribee underwater hull is very sweet but fairly full
forrd […] Corribees  were  built full in the bow to stop diving when running.

One consequence of that is that she gets slapped off the wind by waves, making it even harder to make progress to windward in a chop.

For these reasons, I want to completely replace the sail. I don’t want to modify the existing sail at all — it’s in beautiful condition and it’s a piece of history — so I’ll start from scratch. This gives me a lot of freedom in deciding what to do.

Another issue is Tammy’s mast position. Robin Blain (a very experienced rig developer) told me that the Coromandels’ masts are too far back, and that makes them difficult to tack. I’ve not had trouble with tacking except in a chop, but I think shifting the centre of effort of the sail forward might help. However, I really don’t want to move the mast. It’s in an otherwise well-designed position supported by a reinforced arched coach roof.

Comparing the Coromandel with Annie Hill’s Fantail, a much more recent boat, it doesn’t seem that the partners are far back, but there’s about a 4.5° difference in mast rake.

I believe I can adjust Tammy Norie’s rake and even make it adjustable while sailing but I’ll discuss that in another post.

I also think that Tammy could do with a larger sail area. She doesn’t really get going in anything less than a force 4, and I’ve found that a bit frustrating while cruising around the east coast in summer.  I’d like to carry a larger sail area. Junk rigs are so easy to handle and reef that this really shouldn’t be a problem. The only question would be whether the sail efficiency is compromised if I’m reefed in typical conditions.  The current sail area (according to the brochure) is 18.3m². (For comparison, Roger Taylor as 26m² on his Achilles 24, Mingming II, and Annie Hill has 29.5m² on her Raven 26, seen above.)

Building a junk rig sail is quite straightforward and I intend to do it myself and learn all about it.

What kind of sail? There are several competing sail plans. I think David Tyler’s “fan tail” looks right, and is supposedly a good cruising compromise. On the other hand, Slieve McGalliard’s split rig (a junk rig with a slot) is very intriguing and makes great claims for upwind and light wind performance. Roger Taylor, on the other hand, has stuck with a simple Haslar-McLeod layout for Mingming II, but with a clever system for introducing curves into the panels that I’ll come to.

Various methods of introducing curves into junk rigs have been tried since the 1980s. I’ll give a very brief summary of them.

I have to say that I’m very keen on Roger’s method. It has a very simple construction and could be tweaked quite easily while cruising. Tinkering with things is one of the reasons I like the junk rig, and I’m pretty sure it would be easy to adjust the hinges at sea to try out various sail trim ideas. And carry or make spare panels.

So, what I fancy at the moment is a large fan tail sail with curved panels hanging off hinges attached to a mast with adjustable rake.

Probably all wrong. We shall see.